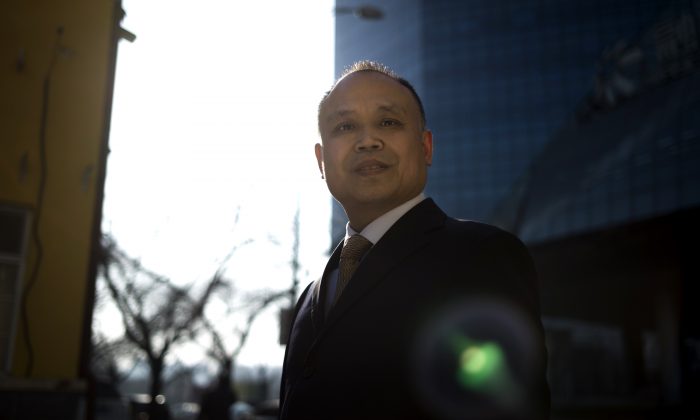 ‘Bring a Shield in One Hand and a Sword in the Other’: An Interview With Chinese Lawyer Yu Wensheng

As a defense lawyer, Yu Wensheng tried to visit his client in a Beijing detention center in October 2014. After the police refused him access, Yu protested outside the detention facility and online.

Two days later, Yu himself was arrested. He wasn’t allowed to meet a defense lawyer during a 99-day detention stint where he was severely tortured. In one incident, police bound his hand behind an iron chair, which was agonizing.

“My hands were swollen and I felt so much pain that I didn’t want to live,” Yu told Amnesty International in their 2015 report on torture. “The two police officers repeatedly yanked the handcuffs. I screamed every time they pulled them.”

This year, Yu and other lawyers lodged legal complaints against the municipal authorities of Beijing and other nearby cities for being unable to properly control air pollution. Earlier, Yu represented several rights activists and many practitioners of Falun Gong, a traditional Chinese meditation practice that has faced nearly 18 years of systematic persecution.

In a high-profile case in March 2016, Yu and three other lawyers defended Falun Gong practitioners in the coastal city of Tianjin. Yu also defended the teachings of Falun Gong—”truthfulness, compassion, tolerance.” The lawyers faced minimal retribution from the Chinese authorities, which is unusual given the sensitivity of Falun Gong cases and the defense they had mounted.

“In over a decade of defending Falun Gong’s innocence, it has long been clear who is lawful and who is committing a crime,” Yu Wensheng told Epoch Times in a recent interview.

In the first half of the interview, edited for brevity, Yu discusses his handling of Falun Gong cases.

Epoch Times (ET): You recently represented Falun Gong practitioner Qin Wei from Beijing. Can you confirm that he was sentenced to two and half years for passing out a book?

Yu Wensheng (YWS): To my knowledge, he was sentenced to two and a half years because he gave a passerby a copy of the “Nine Commentaries on the Communist Party [Editorial series by Epoch Times].”

The “Nine Commentaries” discusses the past few decades of the Chinese Communist Party’s (CCP) rule. I have flipped through that book and read some sections. Everything it discusses is true, and nothing is fabricated. Publishing and distributing the book are normal and legal acts of free speech. Using the “Nine Commentaries” as “evidence” to sentence Qin Wei for “undermining the law using a heterodox religion” is absurd.

China does not have a law saying that Falun Gong is a so-called “heterodox religion.” The Chinese regime use Article 300 of the criminal law to sentence practitioners without any legal basis.

The authorities say Qin Wei was undermining the law. Which law did he undermine? He was not at all involved in criminal acts. I cannot tolerate this type of suppression by the authorities. Sentencing Qin Wei is political persecution.

Qin Wei is a person of faith. The Chinese constitution protects freedom of belief. Freedom of religion and belief is written very clearly in the Declaration of Human Rights. I believe that Qin Wei was not involved in politics, and he poses no threat to the country or society. Throughout the entire process of defending him, I did not find any evidence against him. The prosecution was also unable to produce any evidence in this respect.

Of course in political cases, sometimes it does not matter how much evidence there is. The Nine Commentaries presents much historical truth. The authorities, however, don’t want Chinese citizens to know the truth.

ET: Have you encountered any case where people are sentenced because of a book?

YWS: Yes I have. I have even heard of someone being arrested and sentenced for a poem. A while ago I took on the Beijing Daxing Yu Yanjie case. Yu Yanjie was arrested and prosecuted for posting a short poem online. One line in the poem went, “The red scarf is blood stained, and behind it are evil spirits.”

At that time I said in court, “‘The red scarf is blood stained’ was something we learned as kids from communist education. As for the phrase ‘behind it are evil spirits,’ I recall in the ‘Communist Manifesto’ Karl Marx said, ‘A spectre is haunting Europe — the spectre of communism.’ This is what Marx said. A specter. What difference is there between a specter and an evil spirit?”

The law does not have the word “reactionary.” Which regulation of the Criminal Procedure Law says that going against the Party is a crime? If you are wrong, then you must be opposed, but you aren’t even allowing criticism or an opposing voice. Then you don’t need the “People’s Congress,” public prosecution laws, lawyers, inspection institutes, or courts. All you need is the Public Security Bureau.

If an ordinary netizen is unhappy with the government, nothing severe will happen. They may be released after several days of detention. However, Falun Gong practitioners may be prosecuted. The issue becomes political, and the authorities hold up a book or a poem as their excuse for charging someone, arresting them, and engaging in political persecution.

In that case, why do we need laws?

ET: The Chinese authorities have prosecuted Falun Gong practitioners with the explanation of needing to “maintain stability” in society. Do you think that practitioners are a threat to society?

YWS: This is a country run by atheists. The Communist Party forbids people from believing in God. They do not allow you to detach from atheism. They have formed organizations for all traditional religions, such as the Three-Self-Patriotic Catholic Church and the Buddhist Association. There are division-level and section-level monks. Religion is essentially being managed by the Party.

I sometimes have disagreements with Falun Gong practitioners, but whatever the problem is, practitioners always search within themselves for the reason. After interacting with them for a while, I have also learned to first look for my own problems before blaming others. Once I am sure I am not at fault, then I can start to consider whether others are at fault. However, I am not yet at the realm of letting go of ego.

ET: You have taken on many Falun Gong cases. Is your defense logic different from that of what other lawyers used in the past?

YWS: From 2016, I took on many Falun Gong cases from all over the country. At first I thought I could just do a few cases and then proceed on to other stuff. However, I did not imagine that the authorities would arrest this many Falun Gong practitioners that year.

I think ten years ago, lawyers had a primarily defensive and protective strategy. Prosecutors would bring their swords while lawyers brought their shields. However, a shield can only protect you. I think this strategy is no longer enough. A shield can protect: though you cannot hurt me, it does not threaten the authorities who persecute Falun Gong.

My thinking now is that lawyers who go to court should bring a shield in one hand and a sword in the other. If you arrive with a sword and point out the truth behind them committing an illegal crime, the prosecutors become afraid of harming themselves. Whether it’s the police, the procuratorates, or the courts, they must consider that if they continue persecuting Falun Gong, they will be held responsible in the future.

I observe the prosecutors all the time. They have handled many Falun Gong cases, so usually when you are speaking in court, they do not listen and make little side movements. However, as soon as you mention that they are involved in a criminal offense, they start paying attention. The prosecutor suddenly raises his head to listen. The judge also listens. In fact they understand clearly in their hearts: those who persecute Falun Gong will be held responsible in the future!

They must be clear that persecuting Falun Gong is a crime! We must point this out not only from a technical perspective, but also at the fundamental legal angle as well.

From a legal point of view, there are no laws in China that specifically criminalizes the practice of Falun Gong. Falun Gong is not one of the 14 cult organizations identified by the Party. Actually labeling even those 14 organizations as cults is illegal because the Ministry of Public Security and the General Office of the State and the Party do not have the power to determine what is a cult.

The shift in my thinking of going on the offensive in representing my client finally led to my defense of Zhou Xiangyang and Li Shanshan in Tianjin. Though it was just one single case, I felt that it is in fact a defense of the entire Falun Gong community. The defense summarized everything that has happened since 1999, the authorities’ politically-motivated persecution of Falun Gong, and pointed out that the authorities are the ones who are committing crimes.

This case gave me the opportunity to make the contributions I should be making to this group of people. Falun Gong practitioners have really been through a lot. I believe that the Falun Gong community has created an opening for the Chinese people. Without them, China’s human rights situation could be a lot worse.

Leo Timm contributed to this article.