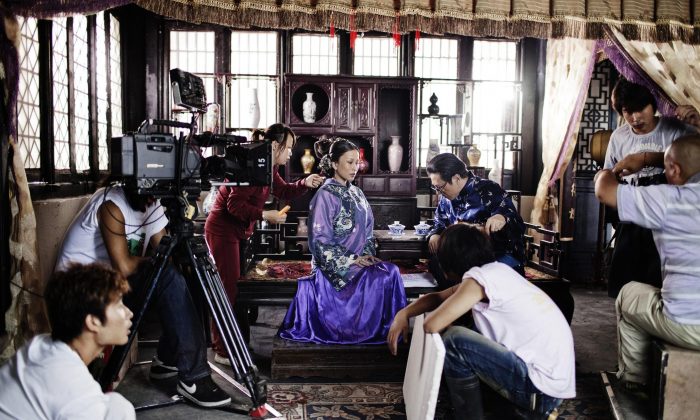 A scene for a TV series is shot at Hengdian World Studio in China, which features a 1:1 scale reproduction of the Forbidden City. The Chinese Ministry of Culture and investors see the country’s film industry as an instrument of soft power abroad. (Giullio Di Sturco/Getty Images)
China Business & Economy

China’s film industry has entered a deep winter amid the communist regime’s draconian COVID-19 lockdowns, with box office attendance in the first half of 2022 down nearly 40 percent year-on-year and no clear sign of recovery.

Despite the summer holiday, which is the peak season for China’s film industry, box office sales have been lackluster due to strict COVID-19 policies. In the first six months of 2022, China’s box offices raked in 17.18 billion yuan (about $2.65 billion), down 37.7 percent year-on-year, and saw 398 million moviegoers, down 41.7 percent year-on-year.

China’s total box office revenue from March to June was only 4.11 billion yuan (about $630 million), less than half that of the same period in 2021 and a 65.6 percent nosedive, with March, April, and May all hitting multi-year lows.

Due to the COVID-19 policies implemented in some mega cities, such as Beijing, Shanghai, and Shenzhen, many cinemas were closed and film release plans were disrupted, which greatly affected cinema attendance.

China Film Co.,Ltd., the country’s first film company, expects net profit to shareholders to fall 91-94 percent year-on-year to $2.77 million to $4 million, according to its earnings forecast for the first half of 2022.

China Film said that during the pandemic, the company’s entire industrial chain of upstream and downstream businesses was greatly impacted. Due to the decline in operating income and the need to bear recurring costs and  essential expenses, the company’s first-half year results are expected to decrease.

Wanda Cinema Line Corp (Shenzhen Stock Exchange: 002739), another leading film company in China, expects that the net profit attributable to shareholders will turn from profit to loss in the first half of 2022, with a net loss of about 520 million to 600 million yuan (about $80 million to $92.3 million), compared with a profit of nearly 640 million yuan (about $100 million) in the same period last year.

Hengdian World Studios (Shanghai Stock Exchange: 603103), which owns the largest film and television shooting location in China, estimated that the loss in net profit attributable to shareholders in the first half of 2022 is 60 million to 75 million yuan (about $9.23 million to $11.53 million), down 129.83 percent year-on-year.

The CCP authorities have shown no sign of a significant shift in the draconian COVID-19 policies so far.

On July 28, the Politburo of the CCP, the Party’s core power body, held a meeting to analyze the current economic situation and plan its economic focus. CCP leader Xi Jinping said at the meeting that “the epidemic must be prevented, and the economy must be stabilized,” but the meeting did not mention China’s economic growth target this year, saying only that “[we] will strive to achieve the best possible outcome.”

According to the Wall Street Journal, the meeting was widely seen as a hint that the regime would not be able to achieve its 5.5 percent economic growth target this year, and that it would continue to implement strict epidemic prevention and control policies.