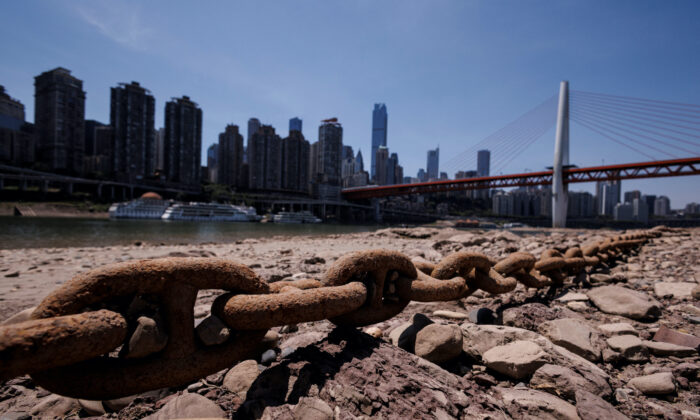 A chain that holds a boat jetty lies exposed on the dried-up riverbed of the Jialing river, a tributary of the Yangtze, that is approaching record-low water levels in Chongqing, China, on Aug. 18, 2022. (Thomas Peter/Reuters)
INSIDE CHINA

Large crowds of people took to the street on the night of Aug. 27, preparing to storm the barricades that blocked them from leaving their community in a subdistrict in China’s southwestern metropolis Chongqing.

Lianfang subdistrict of Chongqing’s Shapingba district was locked down on Aug. 18. After 10 consecutive days of negative PCR tests of residents, the local government continued to keep residents from leaving their neighborhood.

The Shapingba district Pandemic Prevention and Control Headquarters issued a notice on Aug. 18, imposing “temporary control measures” for the eastern urban area of Shapingba, including strict control of the movement of people and traffic, while prohibiting public gatherings. Lianfang subdistrict is within the control area of Shapingba, according to the notice.

In urban areas, China’s cities are divided into districts that are further divided into subdistricts, which are the grassroots administration of the Chinese regime.

Lianfang subdistrict has six residential communities under its jurisdiction and a population of 54,352 as of Nov. 1, 2020.

Video footage obtained by the Chinese language edition of The Epoch Times reveals large crowds gathering in the street, confronting uniformed police across barricades. A man is heard saying that  “several thousands of people” were at the protest site.

The local authorities mobilized police and local militia in an effort to break up the protests, according to the video, but the protesters didn’t back off, and more people were seen joining in.

The Epoch Times reached out to the Lianfang subdistrict office multiple times on Aug. 28, but the calls were not answered. The publication called two local officials for comments, and they both hung up without saying anything.

The Epoch Times is not able to verify the authenticity of the video.

On Aug. 28, at 12:09 a.m., the Shapingba authorities issued a notice, lifting the lockdown measure of Lianfang and Tuwan subdistricts, effective Aug. 28.

“Mr. Han” (pseudonym), a resident of Yuzhong district, Chongqing, told the Chinese language edition of The Epoch Times on Aug. 28 that lockdown measures are actually ways of “restraining personal freedom of ordinary people.”

Yuzhong and Shapingba are among the nine urban districts of Chongqing.

He said that the Yuzhong district is not shut down at the moment, and supermarkets and restaurants are operating as usual.

“But the space for our activities is very limited because we dare not go to other districts,” Han said, “If we leave our district, we are afraid that we are not able to enter our district again.”

“Ms. Li” (pseudonym) is a resident of the Shapingba district. She told The Epoch Times on Aug. 28 that she still could not go back home.

“Although two subdistricts were eased from the lockdown, there were a couple of positive cases of COVID-19 virus in other subdistricts. I am still not allowed to enter Shapingba,” Li said.

“Are we all mad just because we’re locked in our homes? Haven’t we cooperated with the government to do PCR testing every day? We are under closure for 10 days now, but there is still no timeline of relieving the isolation, or any explanation,” a resident wrote on a local social media platform.

“People in wheelchairs in the community are waiting under the scorching sun to do PCR testing every day. There is nothing in the locked-down areas. The government doesn’t care whether the supplies are sufficient or not, or whether the stranded people have a place to sleep. The sick people, students, and workers are not human to the officials, who only care about those who can determine their career,” another netizen blasted in a post.

According to a report in the Chinese language edition of VOA on Aug. 26, many districts of the city recorded temperatures over 40 ℃ (over 104 ℉ ) in August. However, the authorities ordered more than 10 million people in the urban districts to queue for long periods of time for PCR testing on Aug. 24, with only two positive cases found on the day.

To ensure that all residents participate in testing, the authorities turned all health codes orange, restricting their activities in public venues. Their health codes would turn green only after they participated in nucleic acid testing, according to VOA.

The news of Chongqing residents’ protests against the lockdown measures encouraged many netizens.

One wrote: “Protests work. The Lianfang subdistrict was unlocked overnight, and other communities can learn from it.”

A netizen replied, “Lianfang was lifted from the closure due to the protests. After all, the Shapingba government is afraid of trouble.”

Lai Jianping, who holds a master’s degree in international law from the China University of Political Science and Law, told The Epoch Times that the Chinese communist regime’s zero-COVID policies have made life difficult for the Chinese people.

“While Western countries keep lifting COVID-19 related restrictions, the Chinese Communist Party has not eased its stringent lockdowns, which is equivalent to isolating China and impacting the country’s connection with the rest of the world,” Lai said.

On Aug. 30, Chongqing recorded four symptomatic and three asymptomatic cases of COVID-19 virus, according to state-run CQNEWS media of Chongqing, on Aug. 30.

Luo Ya contributed to the article.