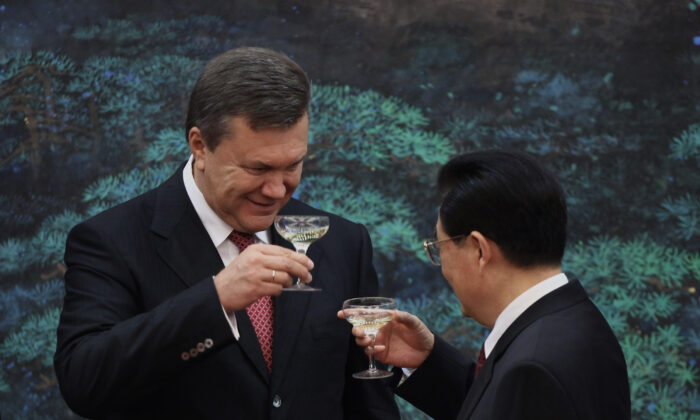 BEIJING—Ukraine, which is locked in a security crisis with Russia, has seen growing investment from China in recent years.

Below are some of China’s main business and economic interests in Ukraine.

Trade relations between China and Ukraine have grown significantly since a state visit to China in 2013 by then-President Viktor Yanukovych.

China leapfrogged Russia to become Ukraine’s biggest single trading partner in 2019, with overall trade totaling $18.98 billion last year, a nearly 80 percent jump from 2013, according to data from the State Statistics Service of Ukraine.

Ukrainian exports to China, mainly commodities such as iron ore, corn, and sunflower oil, stood at $8.0 billion in 2021, while imports from China, largely machinery and consumer goods, totaled $10.97 billion, the data showed.

Increased bilateral trade also facilitated the launch of direct rail freight service between the two countries, although the frequency remains low. Ukraine is also a stop on the China–Europe Railway Express service, which has helped ease logistics headaches for Chinese firms during COVID-19 pandemic.

Ukraine is an important hub within the Belt and Road Initiative, the Chinese Communist Party’s (CCP) signature infrastructure and foreign policy project, which Kyiv joined in 2017. In 2020, the two sides signed an agreement to strengthen cooperation in areas including the financing and construction of infrastructure projects.

COFCO in 2016 launched a grain terminal at Nikolaev sea port worth of $75 million in southern Ukraine. In 2019, CHEC completed a dredging project at the port of Chornomorsk.

China Pacific Construction Group in 2017 signed a deal to build a metro line in the capital Kyiv.

Huawei, which has helped Ukraine to develop its mobile networks, in 2019 won the bid to install the 4G network in Kyiv’s subway. In 2020, Huawei was chosen to help ensure and improve cyber defense and cybersecurity in Ukraine.

In 2021, China Longyuan Power Group Corporation , the country’s largest wind power producer, built and put into operation a large wind farm in the city of Yuzhne.

Power Construction Corp of China also signed a deal to construct an 800 MW wind power plant worth $1 billion with local partners in Donetsk which would be Europe’s biggest onshore wind park.

Not every investment has gone smoothly.

Ukraine said last year that it would halt the takeover of a local aircraft engine maker by Chinese aerospace company Skyrizon due to U.S. concerns of forced technology transfers to the Chinese regime.