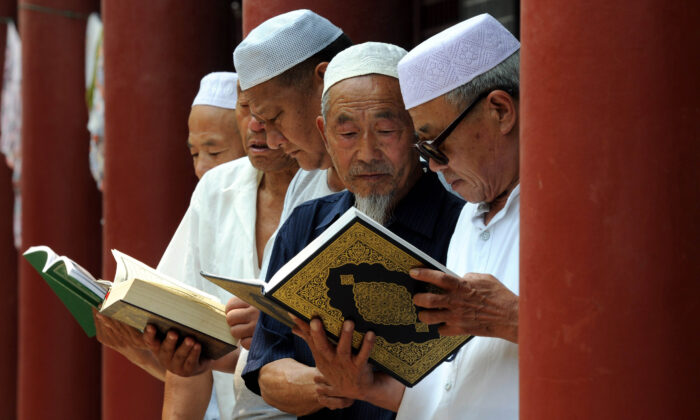 Chinese Muslims read the Koran at a mosque in Tancheng, in eastern China's Shandong Province, at the beginning of the holy month of Ramadan, on June 30, 2014. -/AFP via Getty Images)
Thinking About China

China Writes Its Own Bible and Quran

In November 2019, China made the official decision to rewrite both the Bible and the Quran in order to “reflect socialist values.”

Naturally, this is a political tool that’s needed as part of the crackdown on the Muslim Uyghur minority that has been such a thorn in the side of the Chinese socialist regime. The Chinese Communist Party (CCP) declared that the revision will make sure that the content of the Bible and the Quran don’t contradict socialism.

One of the founding fathers of modern-day socialism, Karl Marx, wrote that “religion is the opium of the people.” While this is often discussed, it’s not the full quote from the original German text. The full quote is commonly translated as: “Religion is the sign of the oppressed creature, the heart of a heartless world, and the soul of soulless conditions. It is the opium of the people.”

This anti-religious philosophy on the part of the left is pervasive worldwide, and the distrust and hatred for religion are shared by all socialist regimes to one degree or another. This hatred from the left is acted out on many levels even in the United States and is ultimately based on eradicating any competition for absolute power.

As is made abundantly clear in China, strong religious beliefs are competition for the hearts and minds of the population, and ultimately for power, and are, therefore, intolerable. However, rather than eradicate religions, socialists have concluded that it’s easier and more effective to create parallel religions that submit to socialism and only pretend to submit to God in order to entice the naive.

In this context, the CCP calls the Bible and the Quran religious classics, and they argue that the revision is justified to ensure the contents conform to the progress of the times. This is a standard propaganda technique, which, in simple terms, is to devise a useful but meaningless statement.

Conforming with the progress of the times is a classic example. The statement is essentially meaningless and therefore nearly impossible to contradict, but it sounds good and justifies any act, no matter how cruel. The average person doesn’t look beyond that point and merely accepts the proposition as the easiest course of action.

Anything from the Quran or Bible that in any way supports, or at least doesn’t contradict, socialism is retained and emphasized; everything else is minimized or denigrated.

The state-run Xinhua News Agency reported that the order to revise the religious texts was given by the Committee for Ethnic and Religious Affairs of the National Committee of the Chinese People’s Political Consultative Conference. This committee was formed by the Central Committee of the Communist Party of China and headed by Wang Yang.

According to French newspaper Le Figaro, Wang stated categorically that religions must follow orders from the Chinese president and interpret religions in accordance with “the core values of Socialism” and “the requirements of the era.”

As the Chinese worldwide propaganda campaign gains momentum, physical force is being used simultaneously to persecute Christians and Muslims inside China.

A large body of photographs and detailed reporting has been smuggled out of China that shows a large complex of concentration camps, churches being burned to the ground, and many forms of pressure on individuals who don’t compromise their religious beliefs in favor of socialism. Estimates claim that at least 1 million Uyghurs and other Muslims have been sent to concentration camps.

The CCP long denied even the existence of the concentration camps, but after the proof became so plentiful and conclusive, they admitted to the existence of what they call educational centers dedicated to teaching job skills.

Attacks on the US Constitution

In the United States and the West, the same techniques are being used by the left for the exact same reasons. Here, it’s called Liberation Theology, which openly admits to being a combination of Christian theology and Marxism.

As in the case of the CCP, the justification for many cruel acts is given as a concern for the poor and oppressed. Once again, this is essentially a meaningless statement that’s very difficult to contradict, but can still be used to justify pretty much anything.

For example, Liberation Theology church members and supporters were widely involved in the Latin American armed conflicts of the 1980s and ’90s, going to the extreme of supplying arms and ammunition to Marxist revolutions.

Using all of the same techniques and for all of the same reasons, the U.S. Constitution is under constant assault from the left. The Constitution was specifically written and designed to stop a single party or person from taking absolute control in the United States. Stated succinctly, it limits power, which is why it’s intolerable for the left and why we see the First and Second Amendments, in particular, under attack.

Free speech and the right to own and bear arms are two of the most basic tenets of a free society and an important part of why there’s still freedom in the United States.

The left calls the U.S. Constitution a “living document,” which is once again one of those meaningless statements that’s difficult to contradict, but is used to justify tossing out the Constitution and writing another version that “conforms with the progress of the times.”

The U.S. Constitution is the single greatest document ever written by man for man, albeit with a healthy dose of divine inspiration openly acknowledged by its authors. Many hundreds of years from now, future historians will still see the beacon of light that hovers over our Constitution and shines down through the ages.

It should be one of our greatest exports to the rest of the world, and we would all be the better for it.