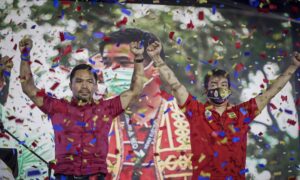 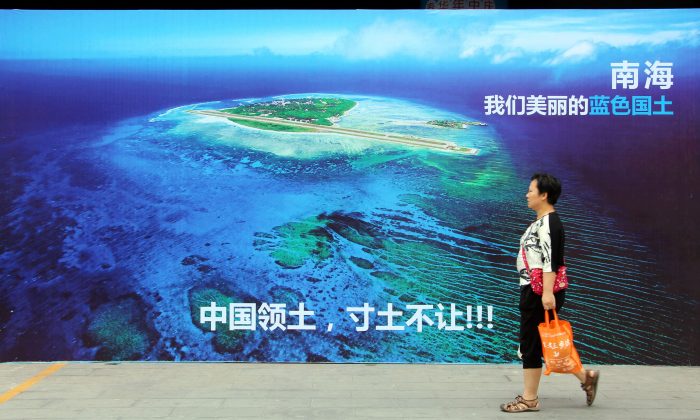 This photo taken on July 14, 2016 shows a woman walking past a poster of the South China Sea, with the slogan at the bottom “China's territory, never to yield an inch of our ground” on a street in Weifang, Shandong province. China plans to create two Chinese-controlled international maritime courts that would be used to justify its own maritime claims, including those in the South China Sea that have already been ruled unlawful by an international court in July 2016. China may build mobile nuclear power plants in the South China Sea, state media reported on July 15, days after an international tribunal dismissed Beijing's vast claims in the strategically vital waters. (STR/AFP/Getty Images)
Asia & Pacific

China to Create Its Own International Courts for Maritime Claims

China is continuing with its plan announced earlier this year to create two Chinese-controlled international maritime courts that would be used to provide China’s interpretation of maritime law. The continuation of the plan is the latest signal that China has not given up on pushing forward its maritime claims in the South China Sea, which have been decisively ruled as unlawful by the Permanent Court of Arbitration at The Hague in a high profile case last year.

The recent statements from Chinese officials and legal scholars echo an article from June 2017, near the anniversary of the 2016 South China Sea Arbitration case, published on China’s One Belt One Road Initiative official website. Originally published on China’s state-run Legal Daily, the article claimed that Chinese legal scholars are working on the creation of an “International Maritime Judicial Center” together with an “International Maritime Arbitration Center,” with the goal of making China “the center of international maritime arbitration and jurisprudence.”

China’s maritime claims in the South China Sea, based on the “Nine-Dash Line” that was drawn to reflect China’s interpretation of historical rights, have long been disputed by most of the neighboring countries in the region.

As over the last decade China intensified building artificial islands and putting military bases on them around Scarborough Shoal and other key features in the South China Sea, the Philippines brought the case to the Permanent Court of Arbitration in the Hague in 2013 to challenge the Chinese behaviors and claims. China chose not to appear before the court and issued a white paper stating its position in December 2014.

In the resulting case, known as the South China Sea Arbitration, the court ruled in July 2016 decisively in Philippines’s’ favor. In response, China vehemently attacked the court and refused to accept its ruling, despite the fact that as a signatory country to the United Nations Convention on the Law of the Sea (UNCLOS), China was bound by international law to comply with its ruling.

CNN first reported in March 2017 that China’s Supreme People’s Court had endorsed the idea of creating an “International Maritime Judicial Center” to advance China’s role as a “maritime power,” although very little detail was revealed at the time. The plan was later upgraded in June to include a new “International Maritime Arbitration Center.” While the differences between the two organs have not been fully explained, both are apparently designed to project China’s voice in international maritime legal affairs and disputes.

Chinese officials and legal scholars also said that increasing China’s voice in terms of international law is crucial for the success of China’s One Belt One Road Initiative. Lin Guo-ping, the Executive Vice President of the Shanghai Law Society, said that the essence of One Belt One Road is not just about “strategy of economic development,” but also about “strategy of the development of law… to project China’s image as a great power with rule of law.”

China’s attempt to reshape international maritime law based on its own interpretation, however, would likely be met with stiff resistance, particularly from those countries most harmed by its maritime expansion, such as the Philippines. The Nine-Dash Line, the essence of China’s claims in the South China Sea, has been thoroughly rejected by Philippines and most other countries in the region, and also by the 2016 court ruling.

According to John Burgess, Executive Director of the international law program at the Fletcher School of Law and Diplomacy at Tufts Unviersity, China’s move to create its own international maritime arbitration center “seems at best entirely redundant and unnecessary.”

“At worst, and without knowing the details, it suggests an effort to create a captive system of arbitration that might divert cases from the procedures created by the United Nations Convention on the Law of the Sea (UNCLOS),” said John Burgess. “[It will] generate a set of precedents faithful to the Chinese view of how the law of the sea ’should’ be interpreted, and thereby undermine the comprehensive, neutral and truly international system contemplated by UNCLOS.”