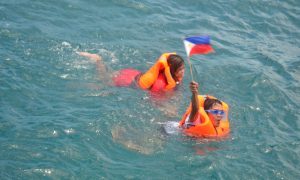 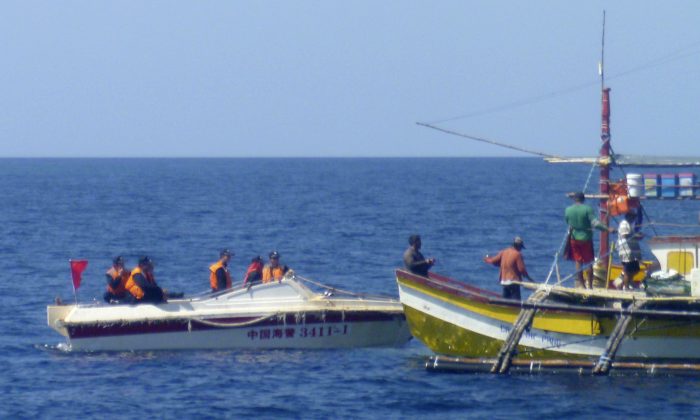 In this Feb. 27, 2015, photo, provided by Filipino fisherman Renato Etac, Chinese Coast Guard members approach Filipino fishermen near Scarborough Shoal in the South China Sea. An international tribunal has found that there is no legal basis for China's claiming rights to much of the South China Sea. The Permanent Court of Arbitration (PCA) issued its ruling Tuesday, July 12, 2016, in The Hague in response to an arbitration case brought by the Philippines against China regarding the South China Sea, saying that any historic rights to resources that China may have had were wiped out if they are incompatible with exclusive economic zones established under a U.N. treaty. (Renato Etac via AP)
International

THE HAGUE, Netherlands—An international tribunal rejected China’s extensive claims in the South China Sea in a landmark ruling Tuesday that also found it had aggravated the seething regional dispute and violated the Philippines’ maritime rights by building up artificial islands that destroyed coral reefs and by disrupting oil explorations.

While the decision is seen as a major legal declaration regarding one of the world’s most contested regions, China immediately rejected it as a “farce” and the true impact is uncertain given the tribunal has no power of enforcement.

While the findings cannot reverse China’s actions, it still constitutes a rebuke, carrying with it the force of the international community’s opinion. It also gives heart to small countries in Asia that have helplessly chafed at China’s expansionism, backed by its military and economic power.

“The Philippines strongly affirms its respect for this milestone decision as an important contribution to ongoing efforts in addressing disputes in the South China Sea,” Philippine Foreign Secretary Perfecto Yasay said in Manila, calling on “all those concerned to exercise restraint and sobriety.”

Former Foreign Secretary Albert del Rosario, who helped oversee the filing of the case, said the ruling underscored “our collective belief that right is might and that international law is the great equalizer among states.”

Del Rosario stressed that it was important for the ruling to be accepted by all.

“For the sake of maintaining international order, it is imperative that the Award and clarification of maritime entitlements be accepted by all relevant countries—without exception—so that we can work together on how remaining issues can be peacefully resolved,” he said.

China and the Philippines are among six governments that have overlapping territorial claims in the South China Sea, waters through which an estimated $5 trillion in global trade passes through each year and which have rich fishing stocks and a potential wealth of oil, gas and other resources.

The disputes have also increased friction between China and the United States, which has ramped up its military presence in the region as China has expanded its navy’s reach farther offshore.

The U.S. said the ruling was an important contribution to peacefully resolving South China Sea disputes and called on both parties to comply with their obligations under the ruling, according to a statement from State Department spokesman John Kirby. It did not immediately comment on the contents of the ruling.

The Philippines, under a U.N. treaty governing the seas, asked in 2013 for arbitration on a number of issues it had with China.

The five-member panel from the Permanent Court of Arbitration in The Hague, Netherlands, unanimously concluded that China had violated its obligations to refrain from aggravating the dispute while the settlement process was ongoing.

China, which boycotted the entire proceedings, reiterated that it does not accept the panel’s jurisdiction. China “solemnly declares that the award is null and void and has no binding force. China neither accepts nor recognizes it,” a statement from the foreign ministry said.

It added that “China’s territorial sovereignty and maritime rights and interests in the South China Sea shall under no circumstances be affected by those awards.” The ministry repeated China’s often-expressed stance that the Philippines’ move to initiate arbitration without China’s consent was in “bad faith” and in violation of international law.

A professor of Asian political economy said the ruling could be a “transformative moment” in the region.

Speaking outside the Peace Palace in The Hague, Leiden University professor Jonathan London said the decision will “give countries with a common interest in international norms something to point to and to rally around.”

He said they can say to China: “Look, here are the results of an international organization that has found that your claims have zero historical basis.”

Japan’s Foreign Minister Fumio Kishida said the tribunal’s decision is “final and legally binding” and that the two sides should comply with it. He said in a statement that “Japan strongly expects that the parties’ compliance with this award will eventually lead to the peaceful settlement of disputes in the South China Sea.”

China considers bilateral talks with the other claimants the only way to address the South China Sea disputes.

It has said vast areas of the South China Sea have been Chinese territory since ancient times and demarcated its modern claims with the so-called nine-dash line, a map that was submitted under the U.N. treaty. Manila brought the case to arbitration because China’s claims infringe upon its own 200-mile exclusive economic zone.

The tribunal said that any historical resource rights China may have had were wiped out if they are incompatible with exclusive economic zones established under the U.N. treaty, which both countries have signed.

It also criticized China for building a large artificial island on Mischief Reef, saying it caused “permanent irreparable harm” to the coral reef ecosystem and permanently destroyed evidence of the natural conditions of the feature.

Dozens of rallying Filipinos jumped for joy, wept, embraced each other and waved Philippine flags after news of the sweeping victory broke out. One held up a poster that said: “Philippine sovereignty, non-negotiable.”

The new Philippine leader, who took office late last month and has spoken of having friendlier relations with Beijing, could influence the aftermath of the ruling. President Rodrigo Duterte said last week his government stood ready to talk to China if it gets a favorable ruling. It remains to be seen, however, how far Duterte can stray from Manila’s previously critical stance, given his country’s growing nationalist sentiment against China’s actions.

Vietnam, meanwhile, accused Chinese vessels of sinking a Vietnamese fishing boat in disputed waters. Nguyen Thanh Hung, a local fisheries executive in the central province of Quang Ngai, said two Chinese vessels chased and sank the Vietnamese boat around midday Saturday as it was fishing near the Paracel islands. The five fishermen were rescued by another trawler around seven hours later.

Vietnam was among several claimants welcoming the ruling in the Philippines’ case.