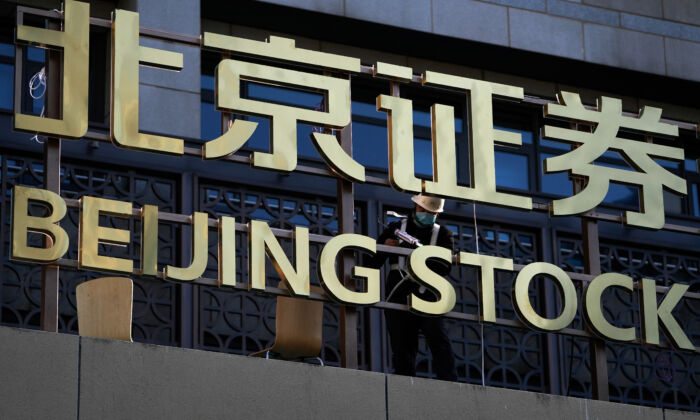 A worker installs the nameplate of Beijing Stock Exchange on the Financial Street in Beijing, on Nov. 14, 2021. (Andy Wong/AP Photo)
China Business & Economy

A new stock exchange set up for smaller companies opens trading in Beijing on Nov.15, amid a crackdown on the country’s tech giants that has wiped more than $1 trillion off their market value abroad.

The new bourse in the capital city joins two other exchanges in Shanghai and the southern city of Shenzhen, mainland China’s financial hubs. Analysts said the Beijing Stock Exchange was intended to give the political center more economic influence.

A total of 81 companies started trading on the Beijing Stock Exchange Monday, and the performances were mixed.

The shares of 10 newly listed companies surged by over 60 percent, triggering circuit breakers. Henan Tongxin Transmission Co., a maker of industrial parts, soared by over 500 percent in its market debut.

But 71 other firms, which migrated from the existing over-the-counter market for small companies, commonly known as the New Third Board, rose or fell by single-digit margins.

The Beijing exchange will accept wider price swings than Shanghai or Shenzhen, according to official media. After their first day, prices will be allowed to fluctuate by a daily limit of 30 percent before trading is suspended. The Shanghai and Shenzhen exchanges are 10 percent one way or the other for the main bourse and 20 percent for their high-tech and small company boards.

The minimum market capitalization of a company to access the Beijing stock exchange is set at about $31.3 million, lower than the requirements of the other two markets—the Nasdaq-style STAR board in Shanghai and the tech-focused ChiNext in Shenzhen.

As he unveiled the plan in September, Chinese leader Xi Jinping said the new exchange was to support “innovation-oriented small- and medium-sized enterprises.”

The announcement comes as the communist regime tightens grips on the private sector by launching data security and other crackdowns.

In July, the ride-hailing giant Didi Chuxing was ordered to take down its apps from the country’s App stores amid a cybersecurity probe triggered by concerns about user data leaving China. The action came two days after the company raised $4.4 billion in its U.S. debut, prompting shares to fall sharply soon after the news.

Investors have knocked more than $1 trillion off the value of Tencent Holding and tech giants on Wall Street and the Hong Kong exchange. They are under pressure to invest their own money in Beijing’s industry plans.

Mike Sun, a private investment consultant in North America, told The Epoch Times that he wouldn’t gamble on the stock exchanges as he prefers long-term investment.

The performance of the Beijing stock exchange may be good for the short term, but it won’t last long, Sun said.

He noted that the authorities hope to use the new bourse to motivate investors to put their money into the Chinese market. But the risk of being hung up would increase with time, Sun said.

Analysts told The Epoch Times in previous interviews that the investment environment in China is at “high risk” due to the regulatory uncertainty and lack of transparency.

The Beijing Stock Exchange has yet to announce an index to track the overall market’s movement. The name is a potential challenge: BSE is already used for India’s main exchange and indexes.

Ruth Li and The Associated Press contributed to this report.