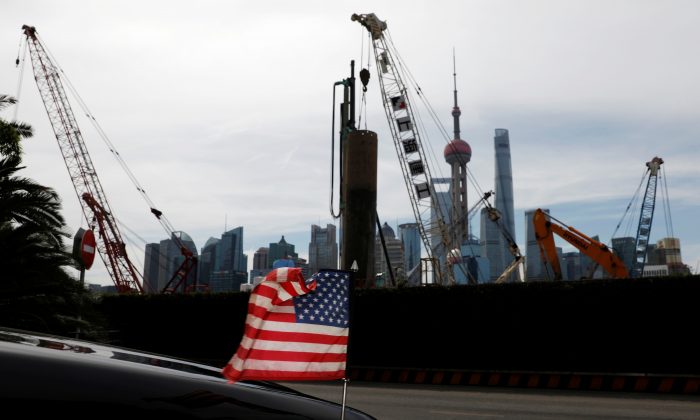 A U.S. flag on an embassy car is seen outside a hotel near a construction site in Shanghai, China on July 31, 2019. (Aly Song/Reuters)
US-China Relations

China Retaliates With New Tariffs on $75 Billion of US Products

BEIJING—China unveiled on Aug. 23 retaliatory tariffs against about $75 billion worth of U.S. goods, putting an additional 10 percent on top of existing rates in the latest tit-for-tat exchange in a protracted dispute between the world’s top two economies.

The latest salvo from China comes after the United States unveiled tariffs on an additional $300 billion worth of Chinese goods, including consumer electronics, scheduled to go into effect in two stages on Sept. 1 and Dec. 15.

The U.S. Trade Representative’s office had no immediate comment on China’s tariffs announcement.

The announcement comes as leaders of the Group of 7 major economies prepare to meet in France this weekend.

The United States, Europe, Japan and other trading partners say Beijing’s development plans violate its market-opening commitments and are based on stealing or pressuring foreign companies to hand over technology.

The talks are deadlocked over how to enforce any deal. China insists President Donald Trump’s punitive tariffs have to be lifted as soon as an agreement takes effect. Washington says at least some have to stay to ensure Beijing carries out any promises it makes.

Trump announced plans to raise tariffs Sept. 1 on $300 billion of Chinese products after talks broke down in May. Increases on some goods were postponed to Dec. 15.

Trump and Chinese leader Xi Jinping agreed in June to resume negotiations. But talks in Shanghai in July ended with no indication of progress. Negotiators talked by phone this month and are due to meet again in Washington next month.