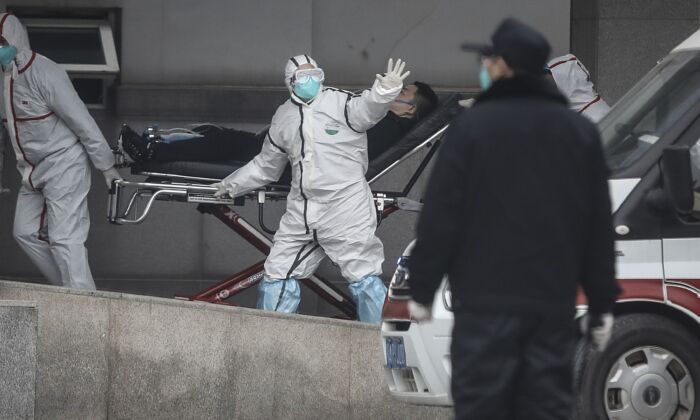 China reported a fourth death due to a new strain of viral pneumonia, in addition to dozens more infections in Beijing, Shanghai, and Guangdong Province, as a top Chinese health official confirmed that the disease can be transmitted from human to human—raising concerns that the illness has already spread widely across the country.

Meanwhile, a third country outside of China has confirmed a case of infection: South Korea.

As the Lunar New Year holiday approaches—it falls on Jan. 25 this year—millions of Chinese are expected to return to their hometowns for festivities and travel abroad for vacation. Official data shows that roughly 3 billion trips take place every year during the new year period.

Zeng Guang, chief epidemiology expert at China’s Center for Disease Control and Prevention, warned Chinese not to travel to Wuhan, the central Chinese city where the illness first broke out, and for Wuhan residents to avoid leaving the city.

“The Lunar New Year is a key factor in the movement of people…This is our expert suggestion,” he said at a press conference in Beijing on Jan. 20.

Chinese leader Xi Jinping also made his first announcement about the disease on Jan. 20, indicating the severity of the outbreak. He called on relevant Party agencies and governments to take swift action to combat the illness. “The recent outbreak…must be taken seriously,” he said in a statement aired on state broadcaster CCTV.

Chinese premier Li Keqiang similarly urged local governments “to work closely with the WHO [World Health Organization] and the governments of Hong Kong, Macau, Taiwan, and other countries.”

To prevent the illness from further spreading, the United States, Canada, Taiwan, Japan, Thailand, and other countries have begun screenings and other measures at airports to detect potentially infected travelers.

The Wuhan health commission announced early on Jan. 21 that an 89-year-old male surnamed Chen has died from the viral pneumonia.

Coronaviruses are a family of viruses that cause diseases ranging from the common cold to SARS, or severe acute respiratory syndrome.

There are also seven suspected cases in other regions across the country: two in southwestern China’s Sichuan Province; one in Yunnan Province, further west of Sichuan; two more in Shanghai; one in southern China’s Guangxi region; and one in Shandong Province, on China’s eastern coast.

State-run newspaper Beijing News, citing the Shenzhen Municipal Health Commission, reported on Jan. 20 that eight suspected patients have been quarantined in the southern Chinese city, in addition to the first confirmed case reported the previous day.

Also, on Jan. 20, eastern China’s Zhejiang provincial health commission announced on its official website that five people from four cities within its jurisdiction have exhibited pneumonia symptoms after recently making trips to Wuhan. They are currently quarantined as suspected cases.

Speaking to CCTV, Zhong Nanshan, head of a senior-level expert group of China’s National Health Commission, confirmed that the disease was contagious.

“In Guangdong Province, there are two infected patients, from different families… They haven’t been to Wuhan, but their family members went to Wuhan and contracted the disease,” Zhong explained in a Jan. 20 television segment.

Zhong, an academician within one of China’s top research institutes and a leading expert on infectious diseases, confirmed that the viral pneumonia can be transmitted among humans, noting that so far, 14 medical staff who treated infected patients have also contracted the disease.

The WHO announced on Twitter on Jan. 19 that “an animal source seems the most likely primary source of this novel coronavirus (2019-nCoV) outbreak.”

Chinese authorities have linked the outbreak to a fresh food market in Wuhan where wild animals and seafood were sold.

Gao Fu, director of China’s Center for Disease Control and Prevention, said at the same Beijing press conference that the virus likely originated from wild animals and mutated after it was transferred to humans and became contagious among humans.

Also on Monday, South Korea reported the first confirmed case of the disease. According to South Korea’s Centers for Disease Control and Prevention (KCDC), the patient is a 35-year-old Chinese tourist from Wuhan.

“The confirmed patient was identified in the quarantine phase and there is no community exposure. Those that have come in contact, including passengers and aircraft crew, are currently being investigated,” the KCDC said. The patient was quarantined after arriving at the Incheon International Airport on Jan. 19.

Two cases were also reported in Thailand, and one in Japan.

Hong Kong, a former British colony that returned to Chinese rule in 1997, has two high-speed trains arriving in the city from Wuhan every day, in addition to 12 direct flights from Wuhan every week.

Back in 2002 and 2003 during the SARS outbreak, 1,755 Hongkongers contracted the illness and 299 died. The Hong Kong government responded swiftly after Wuhan authorities first reported the outbreak on Dec. 31, 2019.

On Monday, Hong Kong’s Health Secretary Sophia Chan said at a press conference that the government will now also hand out health declaration forms to travelers arriving on flights from Wuhan.

But some local medical experts and lawmakers called for enhanced monitoring since large numbers of passengers travel between Hong Kong and the mainland every day. During the upcoming Lunar New Year weekend, many Hongkongers will also travel to the mainland.

So far, more than 100 people have been quarantined in Hong Kong as suspected cases, but none have been diagnosed with the coronavirus yet.

At the Jan. 20 press conference in Beijing, Yuen Kwok-yung, professor of infectious diseases at Hong Kong University, warned that “[the novel coronavirus] can quickly mutate… All of us should not eat any wild animals… We must wear a facial mask.”