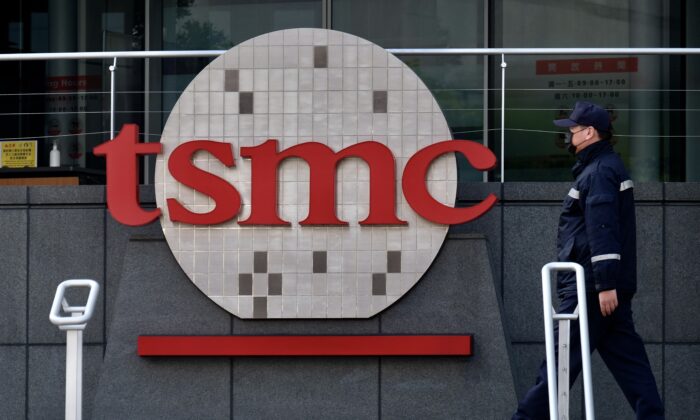 A security guard walks past a company logo at the headquarters of the world's largest semiconductor maker TSMC in Hsinchu, Taiwan, on Jan. 29, 2021. (Sam Yeh/AFP via Getty Images)
Analysis

China banned the import of pineapples from Taiwan and beef and cotton from Australia for political reasons. However, China’s overall reliance on goods from the two countries continues to expand, with its increasing import of chips and minerals.

Official statistics show that in 2021, the highest total amount of goods China imported was from Taiwan at about $249 billion, followed by Korea at $213 billion, and Japan at $205 billion. The United States at $179 billion, and Australia at $164 billion ranked fourth and fifth, respectively.

This move dropped the rate to one-tenth of the pineapples that Taiwan exported to China in 2020 when 90 percent of Taiwan’s pineapple crop was exported to mainland China.

Taiwan President Tsai Ing-wen expressed condemnation of the Chinese authority’s sudden unilateral suspension of importing Taiwan’s pineapples, “this is obviously not a normal trade consideration,” citing the Council of Agriculture’s data that 6,200 batches of pineapples sold to China in 2020 had a pass rate of 99.79 percent.

Taiwan’s ruling Democratic Progressive Party has also said that the Chinese Communist regime is not only using “word assaults and military threats” against Taiwan but is also applying political maneuvers to ban agricultural imports and exert economic pressure on the island country.

Meanwhile, the Chinese communist regime was hoarding a large number of chips made in Taiwan, especially those from TSMC, the world’s leading chip company, despite a global chip shortage.

Data released on January 18 by the General Administration of Customs show that the highest value of imports from Taiwan in 2021 was in the category of electrical and mechanical goods, which covers chips, as well as audio-visual equipment, parts, and accessories, reaching $1,986 billion, much higher than the second-highest rate of optical, photographic, medical, and other equipment and accessories valued at $16.8 million.

According to independent writer Zhuge Mingyang, the Chinese Communist Party is threatening Taiwan by force on the one hand but relying heavily on imports from Taiwan on the other. This reflects the bluff of the regime’s “war-wolf diplomacy.”

China Bans Coal From Australia, yet Imports Other Minerals

Diplomatic relations between the two countries first deteriorated in 2018 when Australia banned China’s Huawei from participating in the construction of its 5G broadband network. Then in April 2020 the Australian government called for an independent international investigation into the source of the COVID-19 outbreak. The first case emerged in China’s central city of Wuhan. China took retaliatory actions, by banning Australian coal imports in October 2020 and imposing an 80.5 percent anti-dumping and countervailing duty on barley in 2021. Australian beef, cotton, sugar, and lobster have also been targeted.

China was the largest importer of Australian coal, as 27 percent of Australian metallurgical coal and 20 percent of thermal coal exports went to China by June 2020, according to a 2020 report by Deutsche Welle.

Although China has stopped importing Australian coal, the regime has a strong need for its other minerals. In 2021, China imported more than $137 billion of mineral products from Australia.

China’s imports from Australia increased by 40 percent in 2021, outpacing its exports to Australia by 24.2 percent year on year.

Australia is one of the Five Eyes Coalition countries (United States, UK, Canada, Australia, and New Zealand), and in 2021, the Coalition has strengthened its efforts to counter the Chinese Communist Party’s aggressive expansion that affects regional stability, such as organizing joint military exercises, issuing a joint statement condemning the lack of democracy in the Hong Kong Legislative Council elections, and joining forces to boycott the Beijing Winter Olympics.

Chinese official media has been attacking the Five Eyes Alliance, but economically, China cannot break away from its dependence on the five countries.

According to Free Radio Asia on Jan. 18, China’s total imports and exports in 2021 reached $6,051 billion, of which $1,206 billion or 19.9 percent, were exports to the five countries based on data by China’s General Administration of Customs.