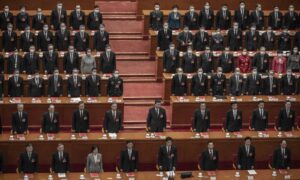 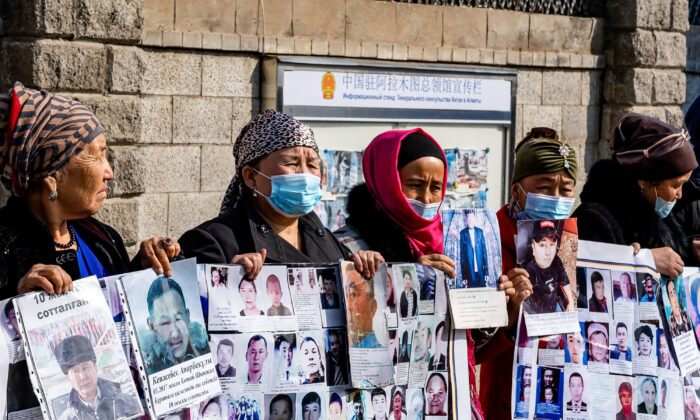 A group of female protestors demand safe passage home for their relatives, who are missing, jailed or trapped in China's Xinjiang region outside the Chinese consulate in Almaty, Kazakhstan on March 9, 2021. (Abduaziz Madyrovi/AFP via Getty Images)
US News

WASHINGTON—China’s religious freedom violations, and its growing influence and activities beyond its borders, were “the most troubling developments” of last year, according to an independent, bipartisan U.S. federal government commission.

In its 2021 annual report released on April 21, the U.S. Commission on International Religious Freedom (USCIRF) called out China as one of the world’s “egregious violators” of religious freedom, saying that conditions in China further deteriorated in 2020.

This year’s report highlights not only Beijing’s abuses targeting its own people, but also its growing international influence on religious freedom and human rights.

The commission found that Beijing’s economic and geopolitical influence overseas had negatively affected rights and freedoms in other countries.

“Tactics include harassment, intimidation, and detainment of human rights activists, ethnic and religious minorities, and other critics and dissidents,” it stated.

Countries including Turkey have yielded to Beijing’s pressure by silencing critics and even repatriating Uyghur refugees to China, the report stated.

Religious freedom violations by the Chinese Communist Party (CCP) and its growing threats and intimidation overseas “represented the most troubling developments that we saw in 2020,” Tony Perkins, USCIRF vice chair, said at a virtual press conference on April 21.

The Chinese regime is also forcing international companies, including U.S. firms, to disregard human rights abuses in China, threatening company executives to “choose between complying with U.S. laws and Chinese laws,” according to the report.

Perkins told The Epoch Times that it’s “reprehensible” for U.S. companies to benefit from products or services that are coming from forced labor in China’s northwestern region of Xinjiang.

“We do not think the United States should do anything that would elevate China in the eyes of the international community, when in fact they are one of the worst, if not the worst abusers of this fundamental human right: religious freedom,” he said in the interview.

He criticized the companies and the U.S Chamber of Commerce for opposing the bipartisan Uyghur Forced Labor Prevention Act.

“These things should not even be in question,” Perkins said. “They need to get their act together.”

Beijing has repeatedly denied allegations of forced labor abuses and recently encouraged a nationwide boycott over Western apparel and footwear brands that have distanced themselves from sourcing materials from Xinjiang.

“Alarmingly, China also has been exporting both its internet governance model and advanced surveillance technology and equipment to countries—such as Belarus, Venezuela, and Zimbabwe—where repressive governments actively persecute and oppress human rights activists and political opponents,” the USCIRF report stated.

Repressive regimes worldwide that seek to replicate a “China model” and import the regime’s “digital authoritarianism” are using Chinese technology companies such as Huawei and ZTE to implement and deploy such technology, according to the report.

Speaking at the virtual press conference, USCIRF Commissioner Nury Turkel said that countries in Central Asia such as Kazakhstan and Tajikistan increasingly “use Chinese methods for political repression and religious persecution.” A number of other countries, such as North Korea, Venezuela, and Iran, are also using Chinese surveillance technology to repress religious and ethnic minorities, he said.

USCIRF Vice Chair Anurima Bhargava added that China’s influence is also playing out in places such as Burma, Vietnam, and other neighboring countries.

The regime’s more than two-decade-long persecution of adherents of the spiritual discipline Falun Gong, also known as Falun Dafa, was also highlighted in this year’s report.

“According to reports, thousands of Falun Gong practitioners were harassed and arrested during 2020 for practicing their faith, and some likely died due to abuse and torture while in custody,” the commission stated. “Credible international reports also suggested that organ harvesting, including from Falun Gong practitioners, likely continued.”

Evidence of organ transplant crimes continues to emerge in China, with investigative reports indicating that the number of organs harvested continues to surge and that organs are available on demand, with short waiting times.

According to Turkel, the CCP’s forced organ harvesting practice has “reportedly expanded to Uyghur prisoners,” including those detained in concentration camps.

“They are even marketing Uyghur organs in the Muslim majority countries. They have a special hospital in Beijing. They promote that hospital through video messages, saying that the Muslim organs are available,” he said at the press conference.

Based on reports, he added, the wait times for some organ transplants have shortened significantly, to only 48 hours.

In early March, a bipartisan group of U.S. lawmakers in the House and the Senate introduced the first legislation to combat China’s state-sanctioned practice of forced organ harvesting, called the Stop Forced Organ Harvesting Act.

In January, the Trump administration declared the CCP’s abuses of Muslim minorities in Xinjiang “genocide.”

“We still really don’t know exactly where this administration will land when it comes to religious freedom in our foreign policy,” Perkins told The Epoch Times.

Perkins criticized Beijing for using the United Nations Human Rights Council as a platform to “whitewash their image,” and push other countries to “follow their repressive policies.”

Chief among a whole set of human rights is religious freedom, Perkins said. His hope is that “we don’t see religious freedom lumped in with everything else but there is a concerted effort to focus on that freedom,” he said.

The commission’s report also highlighted the global reach of the COVID-19 pandemic, which has impacted international religious freedom.

While governments took sweeping action to protect their citizens from the spread of the virus, restrictions have deepened religious divides and intensified religious persecution and violence in some countries, according to the commission.