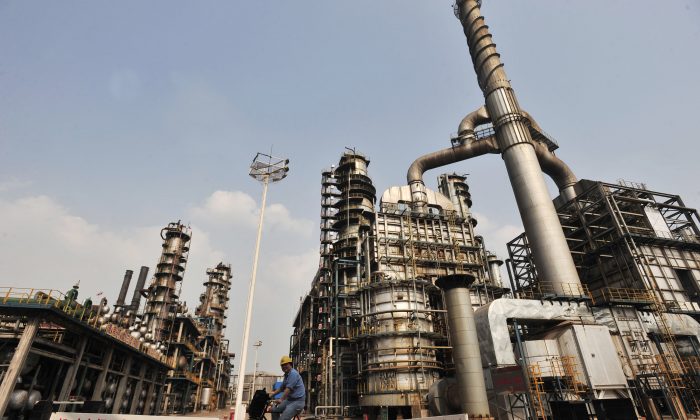 A worker rides a bicycle at an oil refinery of China's Sinopec, in Wuhan, central China's Hubei Province on May 10, 2011. (STR/AFP/Getty Images)
By Chriss Street

China’s Ministry for Natural Resources announced the removal of many competitive restrictions limiting foreign and private energy companies competing against state-owned giants. The new measure will take effect on May 1 this year.

China’s domestic oil production rose from about 1 million barrels per day (bpd) in the 1970s after allowing highly restricted joint ventures with foreign exploration and production firms to gain access to modern drilling technology. But authorities over the last decade have limited access for foreign exploration and production companies to only the most technically challenging onshore and deepwater offshore projects.

Despite being targeted as a national priority and given virtually unlimited access to state funds, domestic oil output peaked at a record 4.4 million bpd in June 2015 and then fell to 3.8 million bpd in September 2019, about the same level as a decade earlier.

With production shriveling and annual consumption rising at a 10 percent rate, the General Administration of Customs announced in November that China’s daily oil imports hit a global record of 11.13 million barrels per day (bpd). At the current pace, China has passed the U.S. peak crude oil import level of 10.1 million bpd in 2005.

China’s state-monopoly mandates created the world’s largest oil and gas company, Sinopec, and the third largest firm, China National Petroleum Corp (CNPC). China’s national oil champions dominate domestic upstream and downstream oil and natural gas sectors, plus have made about $69 billion in offshore investments. With $772 billion in revenues, the two Communist Party cooperatives account for about a third of the global revenues of the top ten global energy giants.

The Energy Information Agency recently commented that China’s largest oil fields are mature and in terminal decline. The biggest challenge for China’s oil production has been the depletion of natural gas at many developed oil fields that is accelerating the overall decline in domestic oil production. The International Energy Agency warned that China’s oil import dependence ratio is about 72 percent and will rise to 76 percent by 2024.

The only untapped Chinese drilling opportunities are the 25.7 billion barrels of proven oil reserves in the geologically challenging western interior provinces and offshore fields that would require highly sophisticated foreign technology to develop.

China announced in July that it would restructure the three categories of its investment “Negative List” that include “encouraged,” “restricted” and “prohibited.” The most meaningful change was “joint venture requirement in oil and natural gas exploration and development is lifted.”

The U.S.-based Wiimer Hale law firm cautioned that although relaxations on foreign investment restrictions for oil and natural gas exploration and development “are welcome,” it is still unclear if “existing rules still mandate foreign investments through equity or cooperative joint ventures or programs with Chinese partners.”

That concern seems to have been addressed by Ministry for Natural Resources in a Dec. 31 China Global Times interview that indicated Beijing for the first time would allow foreign companies to explore and develop domestic oil and gas fields without setting up a joint venture with a Chinese company. Reuters suggests that state-monopolies will have “to cede some of the oil and gas assets they control by virtue of being state companies to private companies.”

Market research analysts at IHS Markit commented regarding the new rules: “China is accelerating the sector reform due to growing energy security concerns.” HIS added, “Vitalizing the industry by diversifying the participants, including foreign and private investors, is the focus of that reform.”