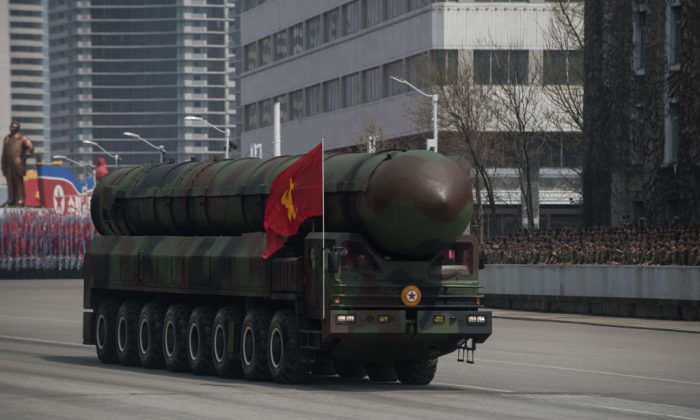 SEOUL—North Korea used Chinese-made trucks to display missiles at a massive military parade last week, according to photographs released by state media, underlining the difficulty in enforcing U.N. sanctions against the isolated state.

In the photographs, the logo of Chinese firm Sinotruk can be seen on the vehicles.

A Sinotruk sales official said on Tuesday he was not aware the company’s trucks had been used in this year’s parade.

“From my understanding, we haven’t had any business with the North Korean market since last year; North Korea has never been a major focus of ours,” said the official, who gave only his last name, Gu.

“It may have been from before then and they refitted it themselves.”

“At the same time, as a permanent member of the U.N. Security Council, China strictly adheres to its international responsibilities, including those from Security Council resolutions,” Lu told a daily news briefing.

Since 2006, it has been against United Nations sanctions to ship military hardware into NorthKorea but control of equipment and vehicles that have “dual-use” military and civilian applications has been far less stringent.

It is also much harder to track.

North Korean state media has in the past released images of Sinotruk chassis and cabins in propaganda related to construction or mining.

A U.N. report which noted the use of the trucks in the display of mobile artillery last year did not name Sinotruk, but said that the Chinese seller had included a “clear clause” in its deal with the North Korean buyer that the trucks were to be for civilian use only.

North Korea also appeared to reveal two new types of intercontinental ballistic missiles (ICBMs) during Saturday’s parade. One was mounted on a large off-road truck which was identified in an earlier U.N. report as being of Chinese origin.

In a 2010 statement sent to the Chinese regime, North Korea‘s forestry ministry said the trucks were bought to transport timber, according to the U.N. report.

The second of the two ICBMs was mounted on a North Korean-branded “Taekpaeksan” militarytruck which used tyres made by China-based Triangle Group, according to photos of the paradeseen by Reuters.

Triangle Group, a major tyre manufacturer headquartered in Weihai, a port city in eastern Shandong province, said it was not aware its tyres had been used in the military parade.

“It’s possible they were resold from somewhere else,” an official from Triangle’s export department said.