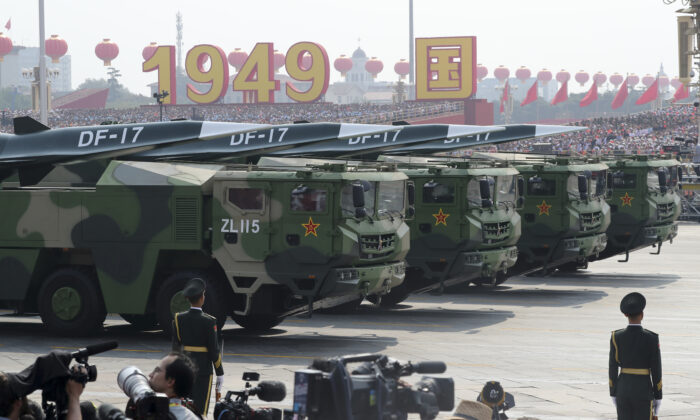 Military vehicles, carrying DF-17, on display during the parade to commemorate the 70th anniversary of the founding of Communist China in Beijing on Oct. 1, 2019. China's military has shown off a new hypersonic ballistic nuclear missile believed capable of breaching all existing anti-missile shields deployed by the U.S. and its allies. (Ng Han Guan/AP Photo)
Thinking About China

China Is Upping the Game in Hypersonic Weapons

The hypersonic missile is the holy grail of the kinetic-kill weapons system. The appeal of such a powerful, supposedly unstoppable weapon is obvious and not lost on the West’s adversaries. It is China, however, that is driving most of the recent concerns over a hypersonics arms race.

Traveling at a speed of anywhere from 5 to 15 times the speed of sound (that is, around 3,700 to 11,000 miles an hour) and able to maneuver while doing so, the hypersonic cruise missile is believed unstoppable and impossible to defend against. Reportedly, a hypersonic weapon could be 10 to 20 times harder to detect than an incoming ballistic missile.

Quite a few countries are working on a hypersonic weapon.

Russia has reportedly accelerated its program to develop the Avangard hypersonic glide vehicle (HGV), which would be launched by an intercontinental ballistic missile (ICBM). According to reports, Moscow wants to deploy up to 60 Avangards by the mid-2020s.

Moreover, Russia claims that it recently test-launched a “Tsirkon” (Zircon) hypersonic cruise missile from a submarine.

North Korea has also claimed success with hypersonic weapons. The North Korean missile supposedly possesses the “guiding maneuverability and the gliding flight characteristics” of a HGV.

India is working on a hypersonic version of its BrahMos cruise missile, which currently flies at supersonic speeds.

The New York Times reported that France, Australia, Japan, and the European Union all have military or civilian hypersonics research projects underway. In particular, Japan supposedly wants its own hypersonic weapon by 2025.

China has been working on an HGV designated DF-17, and it has been test-launched several times, boosted by a conventional missile. The DF-17 is reportedly capable of flying up to Mach 10 (7,400 miles an hour), possibly nuclear armed, and could be launched from an ICBM, giving it global coverage.

Moreover, just a few days ago, a report in the Financial Times claimed that China had tested an earth-orbiting, nuclear-capable weapon that had circled the globe before gliding at hypersonic speeds toward its target.

Basically, this test demonstrated two disturbing capabilities: hypersonics and the ability to deploy an “orbital bombardment system.” If China can perfect these, it would acquire the capacity to negate or overwhelm the United States’ nuclear early-warning and missile-defense systems.

All this, of course, has caused growing panic in the West, particularly the United States. Despite having worked for literally decades on the problem, there is now a new sense of urgency in Washington when it comes to closing a perceived hypersonic “missile gap” with China. In response, the United States has been stepping up its game when it comes to hypersonics, such as developing a “conventional prompt strike” capacity using a hypersonic projectile.

Keep in mind, of course, that hypersonics is not new. Countries have been working on them for decades, the United States in particular. The X-15, a manned rocket airplane that flew in the late 1950s and early 1960s, frequently exceed Mach 5, the definition of hypersonic speed. At the same time, the United States has worked on scramjet technologies since the 1960s and currently has several active hypersonic weapons programs in development.

In particular, the United States and Australia have been collaborating on hypersonic cruise missiles.

At the same time, the physics of hypersonics is a cruel mistress. Achieving hypersonic speeds is incredibly challenging, and most hypersonic projectiles rely on either a supersonic aircraft or a ballistic missile to get its initial boost. Moreover, the missile has to be made of materials that can withstand the punishing friction and heat of hypersonic speeds. As a New York Times article put it, the skin of hypersonic projectiles “expands and deforms and kicks off a plasma like the ionized gas formed by superheated stars, as they smash the air and try to shed all that intense heat.”

Targeting is also difficult since hypersonic systems travel so fast that they can be difficult to control. China’s latest hypersonic vehicle reportedly missed its target by 25 miles.

For a long time, therefore, technological challenges appeared to be an effective barrier to weaponizing hypersonics. For these and other reasons, most countries have been content with perfecting ballistic missiles and subsonic or supersonic (but still highly maneuverable and low observable) cruise missiles.

Consequently, a truly operational hypersonic weapon could still be years off. Most current systems, even the Russian Avangard, are still basically proof-of-concept vehicles.

And the supposedly invincibility of hypersonics may not be destined to last forever. Intercontinental ballistic missiles (ICBMs) are technically hypersonic vehicles and some are even outfitted with maneuverable warheads, but defenses have been developed to cope with these threats. China’s DF-21D anti-ship ballistic missile was considered at one time to be a game-changing “carrier killer,” against which there was no defense; now it appears that such fears were exaggerated.

This is not to say that hypersonic vehicles do not matter, or that they will not be an extremely important metaphorical arrow in the quiver of future warfare. That China appears to be plowing so much energy and resources into hypersonics and orbital bombardment capabilities is a doubly worrisome thing—and one that the West cannot ignore. Even a partial capacity could greatly complicate U.S. military freedom-of-action in the Pacific. If perfected, China could severely undermine the United States’ nuclear deterrent.

A bigger question is: Why is China so openly upping the ante when it comes to nuclear weapons and hypersonic delivery systems? Along with a sizable expansion in the country’s overall nuclear program—building hundreds of new silos and building new nuclear missile-carrying submarines—should Beijing deploy a nuclear-armed drone, it could spark a new arms race. It could even conceivably induce countries like Japan and even Taiwan to go nuclear. The Chinese Communist Party seems unable to understand the law of unintended consequences.