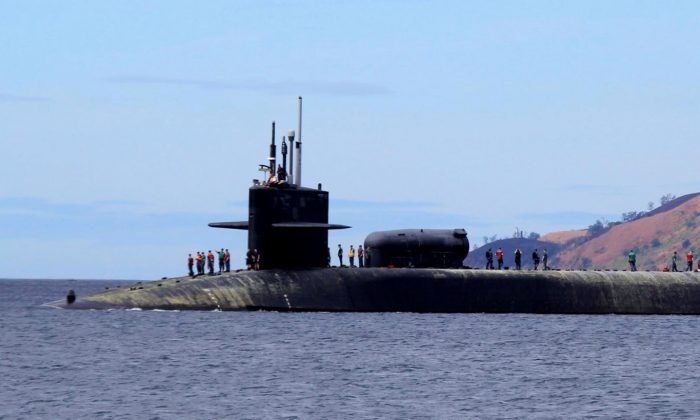 U.S. Navy crew stand on the USS Michigan (SSGN-727), an Ohio-class guided missile submarine, as it prepares to dock at Subic Freeport, a former US naval base Tuesday, March 25, 2014 about 70 kilometers (44 miles) west of Manila, Philippines. (AP Photo/Jun Dumaguing)
China

China is working on an underwater surveillance system that may thwart U.S. maritime advantage in the Asia-Pacific region.

The “Underwater Great Wall Project,” as it is called, proposes a network of ships and underwater sensors capable of “real-time location, tracing of surface and underwater targets,” according to the China State Shipbuilding Corporation.

The company shared details about the project at its booth at a late-2015 public exhibition in China. Translation of the description was obtained by IHS Jane’s, a British publisher specializing in defense, security, aerospace, and transportation intelligence.

The network “could significantly erode the undersea warfare advantage held by U.S. and Russian submarines and contribute greatly to future Chinese ability to control the South China Sea,” IHS Jane’s wrote in a May 17 article.

China is muscling its way into the South China Sea, claiming vast territory already claimed by other neighboring countries that rely on the United States for military protection. Particularly disconcerting was China’s recent move to build advanced military facilities on a man-made island it has created in the Spratly Islands region between Philippines, Malaysia, and Vietnam.

The Chinese plan has been described in greater detail in a late 2015 article by China Ocean News, a publication sponsored by the China’s State Oceanic Administration.

Since 2010, China invested at least 290 million yuan (over $44 million) into underwater surveillance systems at its southern shore bordering the South China Sea.

But the initiatives have suffered lack of coordination, duplication, and waste of resources, among other problems, the article states.

It calls for a “top-level design” of a project that won’t be limited to the waters in China’s jurisdiction, but should also take into account offshore and deep sea areas, remote islands, and channels and “lay the foundation for future expansion.”

“It is emphatically stated, moreover, that China’s ambitions for its undersea observation system cannot be restricted to its coastal waters, but rather may be appropriate to deploy into all ocean areas touching Chinese national interests,” wrote Lyle J. Goldstein, associate professor in the China Maritime Studies Institute at the U.S. Naval War College, in his analysis of the article.