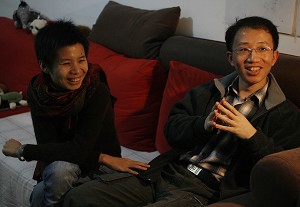 BEIJING—Prominent Chinese dissident Hu Jia pleaded not guilty to subversion charges on Tuesday, at a trial human rights advocates say is part of an attempt to stifle dissent before Beijing's Olympics Games.

Prosecutors told the Beijing Number One Intermediate People's Court that Hu “incited subversion of state power and the socialist system” on the Internet and in interviews with foreign reporters, said his lawyer, Li Fangping.

“He pleaded not guilty,” Li told Reuters after the trial that lasted about three-and-a-half hours.

“He spoke very little. Mostly it was his lawyers speaking on his behalf.”

Hu's mother attended the trial, but his father, uncle and wife, with whom he has an infant daughter, stayed away.

As China prepares to display its growing prosperity and confidence at the Olympics opening on Aug. 8, critics have said the trial shows the ruling Communist Party's desire to silence domestic critics before the Games.

“Hu Jia's case has been marked by grave rights violations from the outset,” New York-based group Human Rights Watch said in a statement e-mailed before his trial.

Li said court officials had pressed for a copy of the defence statement, leading him to believe there could be a quick verdict.

“I think there could be a result quite soon, perhaps this week,” he said.

If convicted, Hu could be jailed for up to five years.

Asked by Reuters to comment on the trial, Communist party leader, Wen Jiabao said individual cases would be handled in accordance with the law.

“As for critics' view that China is trying to increase its efforts to arrest dissidents ahead the Olympic Games, I think all these accusations are unfounded,” Wen told a news conference.

Starting with work on behalf of rural AIDS sufferers, Hu, 34, emerged as one of the country's most vocal and active advocates of democratic rights, religious freedom and autonomy for Tibet, whose capital Lhasa was rocked by riots last week.

A source close to the family said Hu was interrogated for six to 14 hours every night during the first month of detention.

“This deprivation of sleep and marathon interrogation is torture,” the source told Reuters, requesting anonymity for fear of repercussion.