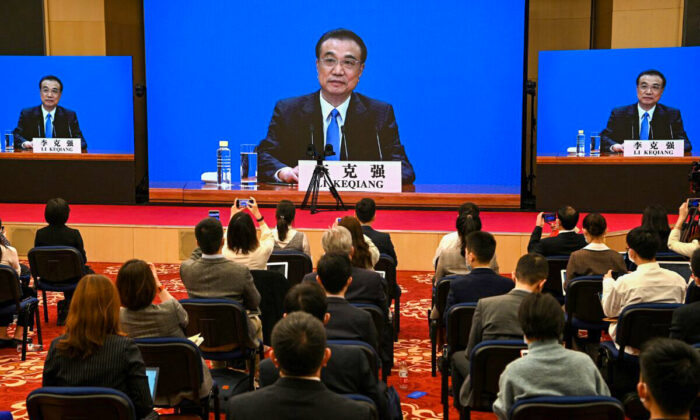 Chinas Premier Li Keqiang speaks via live video transmission during a press conference after the closing session of the National People's Congress at the Great Hall of the People in Beijing on March 11, 2021. (Noel Celis/AFP via Getty Images)
China Business & Economy

Chinese Premier Li Keqiang on May 25 presided over a meeting of over 100,000 officials to issue a stark warning about the “grim challenges” ahead for the country’s economy, which has been battered by the communist regime’s COVID-19 policies.

In a teleconference with representatives from provincial, city, and county levels of government, Li warned about the “apparent downward trend” across employment, manufacturing, electricity, and cargo transportation.

“The difficulties, in some aspects and to a certain degree, are even greater than 2020 when the pandemic hit hard,” he told the attendees, according to a summary from Chinese state media.

The scale of the conference, unseen for years, as well as the tone he struck in the remarks both suggest a sense of growing anxiety as the Chinese premier become increasingly vocal about the outlook of the world’s second largest economy.

A transcript of his speech posted online shows him calling for officials to “try to make sure” the Chinese economy will not contract in the second quarter.

“The goal is not high, and quite a distance away from the 5.5 percent growth target we raised at the year’s start, but this is what we must do judging from reality,” he said.

Investment banks such as UBS, Goldman Sachs, Bank of America, and JP Morgan have recently cut their China GDP forecasts due to the crushing effects of the regime’s “zero-COVID” policies.

“Unexpected” factors since March, such as COVID-19 outbreaks and the Ukraine war have dragged down the economy, Li said, adding that it would take “considerable effort” to reverse the current economic trajectory. April’s government revenue, after taking into account the tax refunds, has dropped by 5.9 percent, while the income for some local governments in the eastern coastal area of China plunged by as much as 32 percent, he said. He revealed that several provinces had requested to borrow money from China’s cabinet-like State Council.

“We are having this meeting today because there’s no time to lose,” he said.

China’s central bank on May 25 also commenced an “emergency” meeting. It later sent a notice urging national banks to prioritize lending, according to Chinese media reports.

Beijing’s heavy-handed lockdowns to contain COVID-19 have grounded production in major industrial and commercial centers. Shanghai, after more than two months of stringent COVID-19 restrictions that have largely fenced people into their homes, saw its industrial output nosediving 61.5 percent in April from a year earlier. Factory production across the country has meanwhile sunk to the worst level since the pandemic hit more than two years ago.

At least 26 Chinese cities have remained in some form of lockdown as of May 23, affecting over 200 million Chinese and more than a fifth of the country’s economic output, according to an estimate by Japanese bank Nomura.

“Factories can’t work, commoners can’t live their lives, and transportation can’t function, this ‘dynamic COVID zero’ is pretty much an economic suicide,” Gu Guoping, a retired professor from the Shanghai University of Engineering Science, told The Epoch Times, referring to the official name for the regime’s zero-tolerance strategy.

While the conference was “unprecedented” in terms of scale, Gu believes it won’t achieve the outcome Li hopes for.

“His boss has him tied,” he said, referencing Chinese leader Xi Jinping, who is seen as spearheading the regime’s COVID-19 policies.

Li, for the better part of the last decade, has long kept a low profile. But his remarks in recent months have appeared to carry a divergent sentiment from Xi.

Despite the continuing outbreak in Beijing, Li didn’t wear a mask in the conference room, which sat dozens of people. He also made no mention of the regime’s zero-COVID policy that Xi has touted.

For Xi to allow Li to convene the meeting on May 25 is indicative of how grave China’s economic problem is, according to Feng Chongyi, a China studies professor at the University of Technology Sydney.

But Li is walking a tightrope right now, he said.

“If Li Keqing indeed succeeds, the credit will still go to Xi Jinping, who is the supreme leader,” he told The Epoch Times. But if Li “can’t salvage the Chinese economy,” he will have to “share the responsibility.”