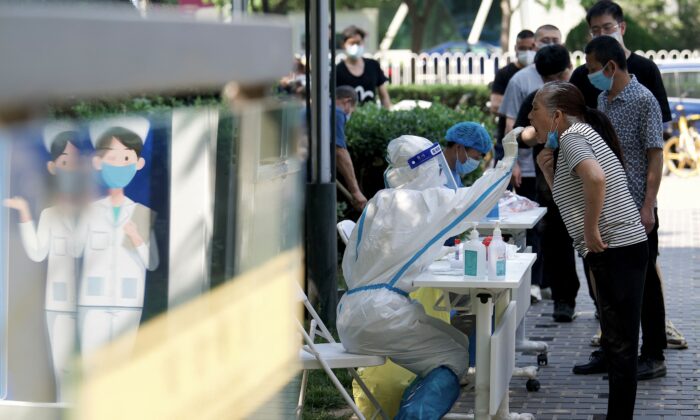 A health worker takes a swab sample from a woman to be tested for the COVID-19 coronavirus at a swab collection site in Beijing on May 23, 2022. (Noel Belis/AFP via Getty Images)
China Business & Economy

UBS Group and JP Morgan Chase cut their forecasts for China’s overall growth domestic product (GDP) growth this year as the country has been crippled by a series of lockdowns implemented by the regime’s strict “zero-COVID” policy.

UBS estimated China’s full-year economic growth would reach 3 percent, rather than 4.2 percent as earlier projected. Meanwhile, JPMorgan downgraded its prediction for the growth of the world’s second economy from 4.3 percent to 3.7 percent. The updated calculation emerges as the regime holds on to its stringent zero-tolerance approach to COVID-19 at the cost of its own economy.

JPMorgan global market strategist Kerry Craig said that China has set the target of 5.5 percent growth for the economy, taming the spread of coronavirus infections through its zero-COVID policy, and supporting its beleaguered housing market.

Yet, “That trifecta of things doesn’t seem like something that is going to balance out easily,’ according to Craig.

His comments echo the predictions of many economists who say that China’s economy won’t be bouncing back quickly from this latest round of lockdowns.

“The lingering restrictions and lack of clarity on an exit strategy from the current Covid policy will likely dampen corporate and consumer confidence and hinder the release of pent-up demand,” the UBS economists noted.

Analysts at Japanese bank Nomura estimate that 26 Chinese cities were implementing full or partial lockdowns or other COVID measures as of May 23, accounting for 208 million people and 20.5 percent of China’s economic output.

The financial hub of Shanghai has been under lockdown for more than two months. While officials have indicated that restrictions would lift starting from June 1, residents have expressed skepticism given authorities have made similar statements over the past weeks, which have not eventuated.

The country’s economic activity has experienced a sharp fall in the past month, according to official data.

Retail sales in April contracted more than 11 percent from a year earlier, marking the biggest shrinkage since the initial coronavirus outbreak in March 2020.

Factories in Shanghai have taken a huge hit as a result of logistics disruptions and worker shortages, with total industrial output in the city falling by 61.5 percent year on year.

“Our case studies of Shanghai, Jilin, Xi’an and Beijing show logistical and supply chain disruptions are the biggest pain points that affect production resumption,” Meng Lei, China equity strategist at UBS Securities, said in a note last week. “Therefore work resumption is likely to be gradual rather than happening overnight.”