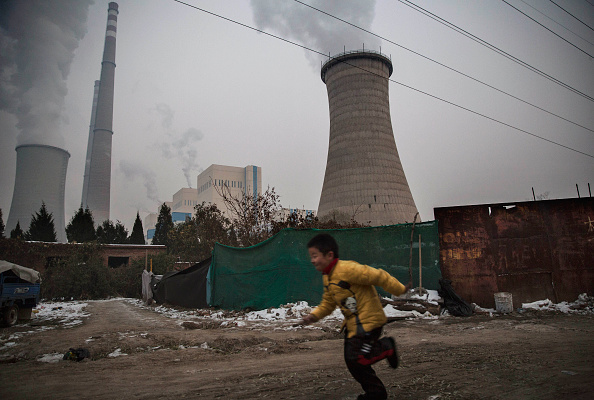 A Chinese boy runs passed a coal fired power plant near his house on the outskirts of Beijing on Nov. 27, 2015. (Kevin Frayer/Getty Images)
Chinese Regime

With coal use restricted, country suffers from natural gas shortage
By Frank Fang

A construction worker arrested for lighting a fire to keep warm has become a symbol for China’s netizens of an energy policy that has gone wrong. With winter descending on China, the regime is having difficulty keeping its citizens warm while meeting new pollution targets.

On Nov. 29, Mr. Wang, a construction worker at Xinzhou City in Shanxi Province, was detained by local public security officers after he was found to have set up three coal fires to keep warm at the construction site where he worked, according to the Chinese news portal Sina. Wang was charged with violating China’s Atmospheric Pollution Prevention and Control Law, and placed in administrative detention for five days.

Wang’s arrest has generated angry and sarcastic comments on Weibo, China’s popular microblogging service similar to Twitter. One netizen from Guangdong Province wrote, “Other countries deal with pollution by upgrading their industries. We do so by freezing poor people to death. You can’t mess with [Chinese authorities].”

Another netizen with the moniker “looklitao” from Henan Province, wrote “Let’s remove these poor laborers! Didn’t Beijing just take the lead in doing so? Why is there the need to arrest this person.” The netizen was referring to the recent mass evictions in Beijing, where poor migrant workers were kicked out of the city’s suburbs following a deadly building fire.

In 2014 Premier Li Keqiang announced a “war on pollution,” and the laborer Wang might be counted a casualty in that war. To deal with Beijing’s smog, polluting factories have been ordered to move out of the city, and private vehicles can only be on the road on designated days (license plates ending with odd number on one day, and those with even number on the next).

But the Chinese regime believes the main culprit behind the choking smog is coal. According to regime mouthpiece Xinhua, the CCP’s goal is to reduce the amount of coal used for generating electricity by 60 percent by the year 2020.

With coal use reduced, the demand for natural gas has surged, causing a shortage in the provinces of Hebei (the province that rings Beijing), Shanxi, and Shaanxi. Beginning on Nov. 28, Hebei’s provincial authorities issued an orange-colored warning (just below the most severe four-level classification), according to news portal Sina, meaning the province faced a 10 to 20 percent shortage of natural gas. A rationing system was put in place, with commercial users being the first to have their supply cut.

To make matters worse, with millions in northern China now relying on natural gas, the region’s inadequate infrastructure development has prevented many northern cities from getting enough supply.

With temperatures dipping between 25 degrees Fahrenheit in Hebei and Shaanxi, many residents have complained about the shortage, according to Hong Kong newspaper Apple Daily. In Zhuozhou City in Hebei, many people recently complained that their natural gas supply would suddenly stop at 8 p.m. on one day, then again at 4 a.m. the next day.

On Dec. 3, hospital officials at Hebei University Affiliated Hospital in Baoding City had to negotiate with the local gas company to keep its natural gas supply to the hospital, according to Chinese state-run news website The Paper. The gas company had announced on Nov. 28 that it would cut off the gas due to low supply in the area.

On Dec. 5, the state-run newspaper China Youth Daily reported that many schools in Quyang County in Hebei were without heat because local authorities had failed to replace the schools’ old coal heating system on time with one powered by either electricity or natural gas.

At Nanyawocun Elementary School, also in Quyang, many classes were held outside in the sunlight since classrooms became extremely cold without heating. At a school in Qicunzhen, a town in Quyang, students had to use hand warmers to stay warm.

Liu Ruishao, a well-known political commentator in Hong Kong, told Apple Daily that the recent natural gas shortage, as well as the evictions of laborers in Beijing, showed how Chinese officials only care about how they can fulfill demands from their superiors, so they “would take any means necessary to complete their political mission.”

“If there isn’t a reform to the culture of the Chinese Communist Party, actions that could hurt the people will continue to happen frequently,” added Liu.