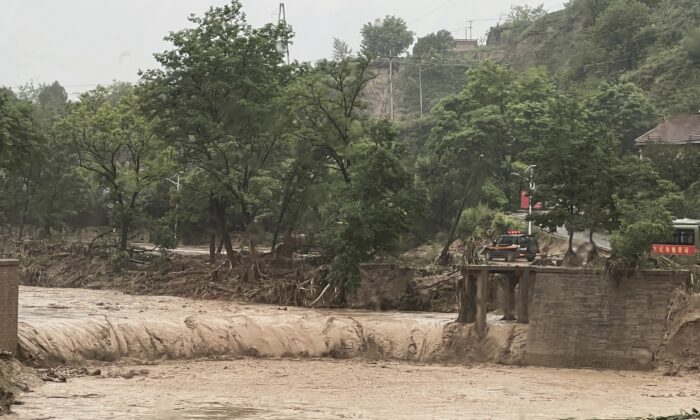 A vehicle near a part of a bridge that was washed away by flood waters along a river in Qingyang in northwest China's Gansu province on July 16, 2022. (Chinatopix Via AP)
China

BEIJING—Flash floods in southwest and northwest China have left at least a dozen dead and put thousands of others in harm’s way, state media reported Sunday.

In the southwestern province of Sichuan, at least six people have died and another 12 are missing after torrential rain triggered flash floods, state-owned news outlet CGTN reported.

Some 1,300 people had been evacuated as of Saturday, the report said.

Meanwhile, in Longnan city in the northwestern province of Gansu, another six deaths were reported and 3,000 people have been evacuated, state broadcaster CCTV said.

The actual number of casualties from such events may be much higher, as the Chinese regime routinely suppresses or alters information.

Rainfall in 1.5 day was as much as 98.9 millimeters (3.9 inches) in the worst affected areas, almost double the July average.

The rains come amid a heat wave in parts of the country including eastern Zhejiang province and the city of Shanghai, with temperatures soaring as high as 42 degrees Celsius (107 Fahrenheit) last week.