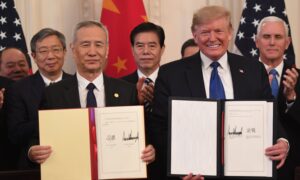 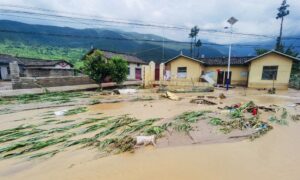 Despite U.S. agricultural exports to China falling one-third through May due to trade war retaliation, exports have surged above forecast due to the flooding of 433 rivers across China.

The U.S. Department of Agriculture reported that pork, corn, wheat, cotton, rice, sorghum, and soybean exports to China from July 10 to 16 are trending above the Phase 1 annual rate of $32.9 billion negotiated in January by the Trump Administration.

Donald Trump ran for President promising to slash the $419.2 billion U.S. goods trade deficit by using tariffs to decrease China’s $539.5 billion in exports to the United States and increase America’s $120.3 billion exports to China. At the time, China’s average tariff on U.S. products was 8 percent; while the U.S. average tariff on China was 3.1 percent.

When the parties called a Phase 1 truce on Jan. 15, China had more than doubled its tariff rates on U.S. goods to 20.9 percent; but the Americans had spiked tariff rates on Chinese goods by seven times to 21 percent. The two-year deal required China to increase U.S. manufacturing, energy and service purchases by $120 billion, but it also mandated that China must increase annual U.S. agricultural imports from $24 billion in 2017, to $32.9 billion in 2020, and $44.8 billion in 2021.

However, China blamed the coronavirus pandemic for its failure to significantly increase U.S. agricultural imports that through the month of May were running at an $12 billion annualized rate, or about a third of the Phase 1 agreed level.

With most analysts predicting a resumption of its trade war, China was hit by the worst flooding since 1940. After 31 days of continuous torrential rain through July 2, China’s Three Gorges Dam, the world’s largest hydroelectric dam with a 5-trillion-gallon reservoir capacity, was forced to open all its flood gates and send 28 acre feet of water per second careening toward Yangtze River downstream residents.

After estimating that 45.2 million Chinese have been already been affected by floods that ravaged 27 provinces along the Yangtze River, Huai River, and Yellow River, the China Meteorological Administration issued a “No. 1 Flood” warning as Southern China was hit with a record 16.8 inches of rain falling in a 30-hour period beginning on July 4.

With China’s monsoon rainfall season running about 46 percent higher than normal, and 17 percent higher than the devastating floods of 1998, about 20 percent of the nation’s arable land is now submerged. This could lead to major crop loss this year, with rice, rapeseed and cotton being the most affected by the floods, according to market analyst firm Seeking Alpha. Furthermore, the African swine fever pandemic that caused the culling of 180 million infected pigs last year returned as floods unearthed shallow graves and contaminated groundwater.

With no alternative nation capable of addressing the scale of its potential food security crisis this year, the U.S. Department of Agriculture (USDA) reported that China bought 1.365 million tons of American corn on July 10. The large transaction was followed on July 14 with a single-day record purchase of 1.762 million metric tons of corn.

The USDA added that China has quietly been buying substantial amounts of pork, sorghum, soybeans, and cotton since May.

The 14-day weather prediction for the Yangtze River valley forecasts a high probability of rain and the multi-day risks for severe thundershowers over the next two weeks.