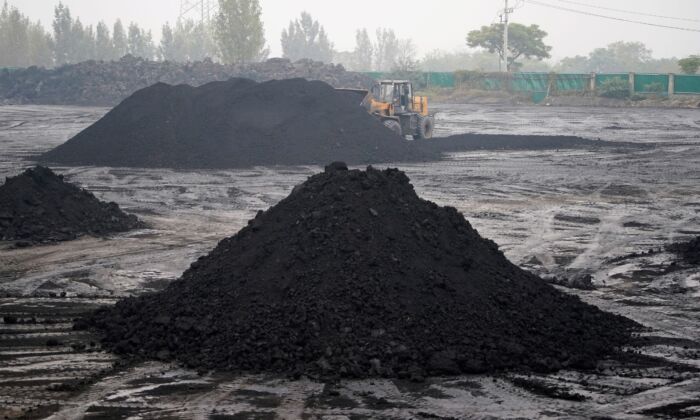 An excavator sifts through dunes of low-grade coal near a coal mine in Pingdingshan of Henan province, China, on Nov. 5, 2021. (Aly Song/Reuters)
Climate Policies

As the world seeks to phase down use of coal, China’s biggest coal-fired power plant has just finished construction and entered operation on Dec. 28.

The Shanghaimiao plant, located in the country’s top coal-producing region of Inner Mongolia, said on Tuesday that its first of four 1,000-megawatt units was online after passing a 168 hour period of trials.

The thermal power plant is operated by the Guodian Power Shanghaimiao Corporation, a subsidiary of the centrally-owned China Energy Investment Corporation.

China, where coal-fired plants generate more than two-thirds of its electricity, pledged to reduce its reliance on coal as part of global efforts to tackle climate change, but to do so only after 2025.

The power crunch engulfing the country this year has disrupted the daily lives of tens of millions of people, crippled industrial output, and wreaked havoc on global supply chains. As a result, the authorities ordered the mining and burning of more coal to stave off a prolonged energy crisis over the winter.

China’s power generation accounts for one-third of global coal consumption, and the country’s dependence is anticipated to grow by nine percent in 2021, the International Energy Agency said in a report published this month.

China’s State Grid Corporation said in a December report that energy security concerns mean the country is likely to build as much as 150 gigawatts (GW) of new coal-fired power capacity over the 2021-2025 period, bringing its total to 1,230 GW ahead of its 2025 deadline.