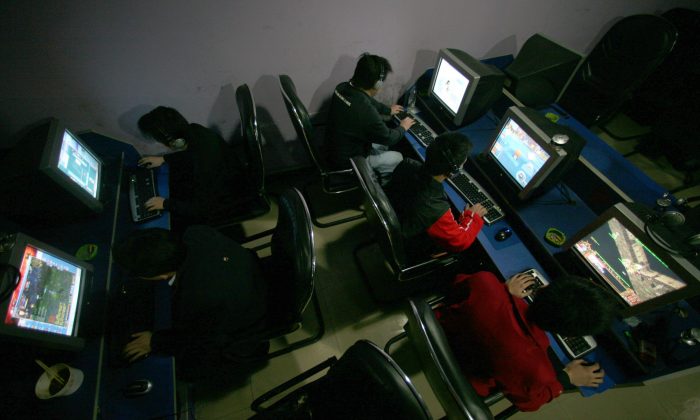 People surf the internet at a cyber cafe in Chongqing City in southwestern China on January 24, 2007. (China Photos/Getty Images)
US

WASHINGTON—China exploits the openness of the U.S. innovation network, from Silicon Valley to the nation’s universities, yet the United States may still be underestimating the scale of the Chinese threat, warn experts.

NanoMech, a leading nanomanufacturing firm based in Arkansas, was a frequent target of cyber attacks. Recently, the FBI warned the company that it was the second most-hit firewall by the Chinese cyber-militia in the southern United States.

“While I suppose we could take this as a compliment to our superior science and technology, we moved fast to squash this attempt before it had a chance to succeed,” Phillips said.

The company had to incur a significant cost to boost its network security and firewalls.

He says America’s reign as an economic leader of the world will be over if it does not pay attention to China.

“When its GDP surpasses America’s, China will dominate the world economically by a margin far more than the United States has and at that point, China will be in total control,” he said.

The Chinese regime unveiled its 2025 blueprint three years ago, announcing the goal of achieving dominance by 2025 in 10 high-tech industries, including advanced information technology, robotics and automated machine tools, and aircraft.

To realize its economic ambitions, the regime has been resorting to various tactics including industrial espionage, cyber theft, forced joint ventures in exchange for market access, and acquisition of foreign companies to attain sensitive technologies.

“Their access to cheap capital and underpriced inputs is notoriously unavailable to their international rivals,” Michael Pillsbury, director of the Center on Chinese Strategy at Hudson Institute, said in his testimony.

To acquire foreign companies, China’s leaders can fund the SOEs through massive foreign exchange reserves. From 1985 to 2005, China spent $300 billion to support the largest publicly owned companies, according to Pillsbury.

According to a recent report by the office of the U.S. Trade Representative, China continues to protect its industries by excessive domestic subsidies, stockpiling of commodities, and discriminatory taxes. All these measures violate the World Trade Organization rules.

Not playing by the rules pays off, said Pillsbury.

China expanded its market share in the last decade and overtook its rivals in key industries like steel, auto parts, glassmaking, and paper production.

“China shifted from a net importer of steel in 2000 to the world’s largest producer and exporter, with 40 percent of the global market,” he said.

The scale of Chinese investment in U.S. early-stage technology companies is also concerning.

“China’s participation in venture deal financing was at a record level of 16 percent of all venture deals financed in 2015 and remained at 10 percent in 2016 and 11 percent in the first ten months of 2017. This is concerning,” Michael Brown, former CEO of Symantec Corporation said in his testimony.

Brown conducted a research on how China is transferring technology through investments in early-stage firms for the Defense Department and found that more than 500 Chinese-based or affiliated entities invested in U.S. early-stage companies last year.

American Superconductor, a U.S. energy technology company, is a recent victim. The company partnered with a local firm, Sinovel, to access the Chinese wind turbines market. Sinovel used one of the American Superconductor employees as an insider spy and stole its control software code. As a result, the U.S. company lost more than $350 million in revenues and $1 billion in equities. It also had to lay off hundreds of employees.

Leading American universities and labs have been targets of Chinese espionage and cyber attacks, according to experts.

“In the past few years, there have been a number of intrusions targeting universities that engage in sensitive or military research, including Penn State and the University of Virginia,” Elsa Kania, an adjunct fellow at the Center for a New American Security, said during the hearing.

She claims universities are easy targets as they pay little attention to cybersecurity.

The Chinese regime is also targeting talent and using Chinese students by placing them in sensitive areas of U.S. research, said Brown.

The new bill is an important step, according to experts, as it will allow the U.S. government to scrutinize a greater range of transactions. President Donald Trump urged Congress to enact the bill quickly.

Pillsbury said, “This is clearly a bipartisan national security matter. … We have made a good start toward a new strategy toward China, but we may still be underestimating the problem and China’s resistance to change.”