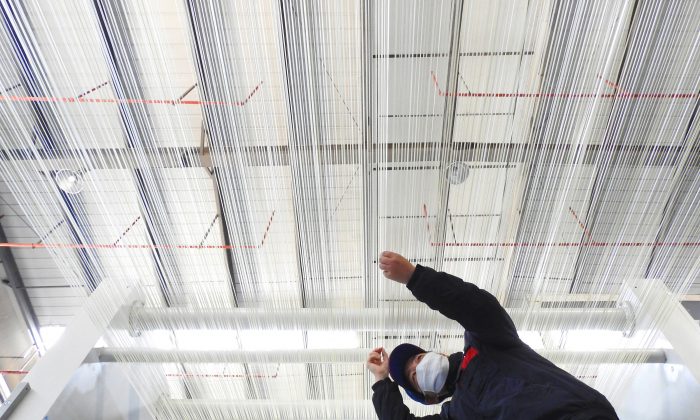 An employee works on a T1000 carbon fiber production line at a factory in Lianyungang in China's eastern Jiangsu Province on Feb. 27, 2018. -/AFP/Getty Images)
China-US News

What Is the ‘Made in China 2025’ Program That Is the Target of US Tariffs?

The United States has finally unveiled the full list of more than 1,000 Chinese products that will be slapped with import tariffs, followed by the Chinese regime’s announcement of tariffs on American soybeans, airplanes, and other imports less than 12 hours later.

An official from the U.S. trade representative’s (USTR) office told Reuters the U.S. tariff list targeted Chinese tech products that benefit from the Chinese regime’s industrial policies, including the “Made in China 2025” program.

The Chinese regime, in return, has been following the plan to a T, in order to gain technological advances that serve its own national interests.

What is the Made in China 2025 program exactly?

As Scott Kennedy of the Center for Strategic and International Studies explained in a Q&A on the think tank’s website, the plan is based on Germany’s “Industry 4.0,” which was based on the idea that manufacturing can be upgraded by “applying the tools of information technology to production.”

The Mercator Institute of China Studies based in Germany released an analysis of the Made in China 2025 plan in 2016, where it put terms more simply: “The goal is essentially to build an economic structure and capabilities similar to that of Germany and Japan: a strong industrial country based on a robust and innovative manufacturing industry.”

As China seeks to avoid the “middle-income trap” and upgrade its manufacturing sector, the regime wants to become less reliant on foreign high tech imports. But the Chinese regime’s goal isn’t simply to attain self-sufficiency in the aforementioned sectors—the proposed timeline is 70 percent self-sufficient by 2025—but to eventually compete with and even displace foreign firms globally.

The USTR office, which released a report following its investigation of China’s intellectual property theft, cited the Made in China 2025 blueprint repeatedly as evidence for the regime’s strategy of acquiring foreign firms in order to obtain their technological innovations.

The Mercator Institute study explained why the plan posed a serious threat to Western economies:

“China pursues an outbound industrial policy with government capital and highly opaque investor networks to facilitate high-tech acquisitions abroad. This undermines the principles of fair competition: China’s state-led economic system is exploiting the openness of market economies in Europe and the United States.”

In the past few years, Chinese acquisitions have indeed been consistent with the Made in China 2025 blueprint. After the plan was released, Chinese investments in foreign companies that specialized in automation and digitization of industrial production increased significantly, according to the Mercator Institute. Most of the investments were in German firms such as Broetje Automation, which manufactures machines in the aviation and aerospace industry. Shanghai Electric acquired the company in October 2016. Earlier that year, Shanghai Electric bought a 19 percent stake in Manz, a German firm specializing in manufacturing electronic parts, solar modules, and lithium-ion batteries.

In 2016, Beijing E-Town, an agency of the Beijing municipal authorities, bought iML, a firm specializing in technology for flat-screen display and LED lighting. It allowed China to acquire key technology in developing different mobile and computer chips.

When looking at China’s overall foreign business deals, the influence of the Made in China 2025 plan is also apparent. According to the Taiwan-based Chung-Hua Institution for Economic Research, in 2016, the top two industries where Chinese firms have engaged in foreign acquisition deals are manufacturing, about $30 billion worth, and information technology/software, about $26.4 billion worth.

Many of China’s national investment funds are also geared toward high-tech sectors. China Integrated Circuit Industry Investment Fund is among the most ambitious, having raised 120 billion yuan ($19 billion) so far, with a target of 600 billion ($95 billion), geared toward investments in chip manufacturing and design, according to the Chung-Hua Institution.

Such financial support is evidence that private Chinese firms are directed by the state on where to engage in foreign acquisitions, the USTR report found.

Another method the Chinese regime uses to acquire foreign technology is to force American and other Western firms operating in China to transfer their tech knowledge to their Chinese joint-ventures, in exchange for market access.

This [plan] undermines the principles of fair competition: China’s stated economic system is exploiting the openness of market economies in Europe and the United States.
— From a 2016 study by the Mercator Institute of China Studies

According to the US-China Business Council’s 2017 member survey, 19 percent of responding companies said that in the past year they had been directly asked to transfer technology. Of these, 33 percent said that the request came from a central government entity and 25 percent that it came from the local government.

In an annual business climate survey conducted by the American Chamber of Commerce in China and published in January, 27 percent of American businesses cited lack of sufficient intellectual property (IP) protection as a major barrier to increasing innovation. Another 15 percent answered “IP localization requirements and/or technology transfer requirements.”

The USTR report found that for U.S. companies that are the focus of China’s industrial policies, the pressure to transfer technology was “particularly intense.” A 2017 government survey of the U.S. integrated circuit industry found that 25 companies had to form joint ventures with Chinese entities and transfer technology in exchange for market access.

European firms also feel the same pressure. The EU Chamber of Commerce in China released a 2017 business confidence survey where 17 percent of overall respondents had to transfer technology in exchange for market access. Among the highest percentages—more than 20 percent of respondents—were in sectors targeted by the Made in China 2025 plan: 31 percent in aerospace and aviation, 23 percent in machinery, and 21 percent in automotive/auto components.

In January, the German state secretary for the Ministry for Economic Affairs called for Europe-wide measures to more closely scrutinize Chinese investments in European firms. “It is essential that we get a tougher law in the European Union this year to resist takeover fantasies or outflows of technology or know-how,” he said in an interview with Reuters.

How Doctors in China Turn Into Murderers