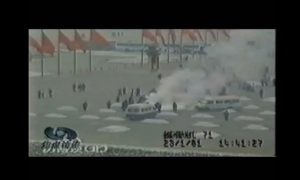 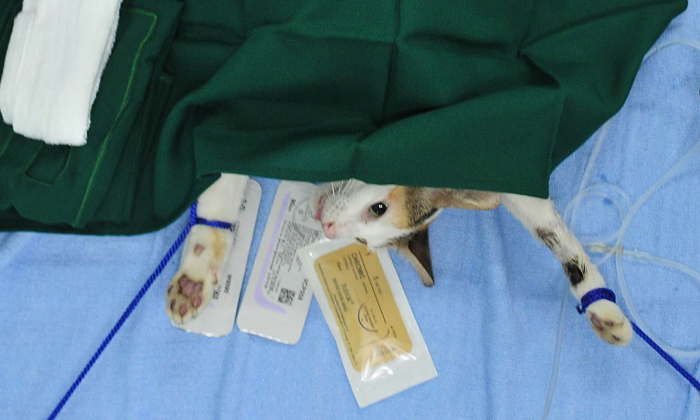 A cat on an operating table. (Veejay Villafranca/Getty Images for WSPA)
Social Issues

A cat owner gave their cat cosmetic surgery to enhance its beauty, Chinese media outlets reported on Feb. 27. However, on March 1, a veterinary surgeon said on Weibo, China’s version of Twitter, that the story was nonsense.

State media claimed that a woman in Nanjing, historically Nanking, paid $1,500 USD to give her cat’s eyes cosmetic surgery to make them larger and more attractive. The cosmetic surgery, known as “double eyelids” is becoming more popular among east Asian nations.

In modern Chinese culture, double eyelids are considered much more beautiful than single eyelids. A double eyelid is when there is a visible fold of skin above the eyes when they are open, and the eyes generally appear larger.

Both double and single eyelids are naturally occurring, though double eyelids can be made through surgery.

The original report said that a cat owner posted post-operation pictures of her cat on Weibo. The eyes were swollen, bloody, and stitched, according to Chinese state-funded media ThePaper.cn.

The report did not name any of the individuals involved. This is likely because the story was fake news.

On March 2, a video posted on Weibo stated that the claim of cosmetic surgery was not true.

The poster, whose Weibo username includes the word Cheng, said the surgery that was done was actually routine. The surgery was to fix an “inverted eyelid.” He also commented, “The cuts were made under the eyes. What were they doing, making double eye bags?”

Cheng described that without this surgery, the cat’s eyelashes will poke the eyeballs. The actual surgery involves cutting a crescent-shaped piece of skin from under the eyes.

The price for this operation, according to Cheng, would also be no more than $450 USD. This is not even a third of the suggested price from the state-media report.

The state-run media in China has made errors in the past, some even embarrassing. The media has reported on advanced foreign weapons, including massive humanoid robots or advanced helicopters, that were merely animations or toys.

The media has also reported on a glass-floor airplane from Virgin Airlines, and a comic report from The Onion about Kim Jong Un being “the sexiest man alive.”

China’s state-run media is also used as a propaganda tool and to repress certain groups that are seen as a threat to the Communist Party’s rule.

Most notably, state-run media aired a documentary showing a small group of supposed Falun Gong practitioners who set themselves on fire in Tiananmen Square on January 2001—referred to as the “self-immolation” incident. However, there were holes in the story and Philip Pan of the Washington Post proved at least two participants were not Falun Gong practitioners.

This incident manipulated public opinion on Falun Gong, and was a false event from the beginning. Falun Gong has been brutally persecuted by the Chinese Communist Party since 1999 due to its immense popularity in China. According to estimates cited by Western media, around 70 to 100 million were practicing by the end of the 1990s.