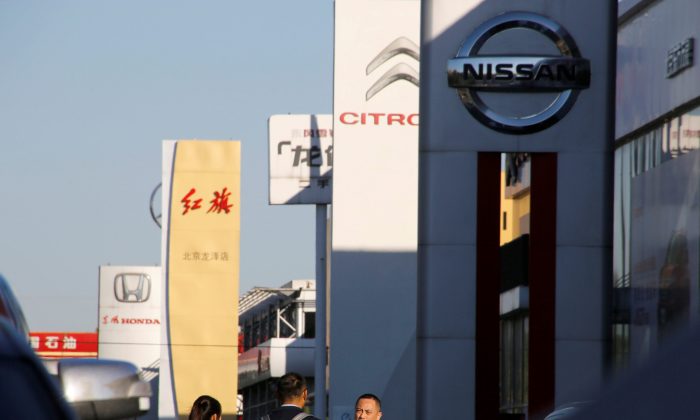 People walk near the showrooms of Chinese and foreign car dealerships in Beijing on Oct. 11, 2018. (Thomas Peter/Reuters)
China Business & Economy

BEIJING/SHANGHAI—China’s top auto dealers’ association has asked the government to halve taxes on car purchases to revive faltering sales, sources said, as worries grow the country’s auto market could shrink this year for the first time in decades.

The influential body has made proposals in previous years that have helped shape auto policy. When China last cut the purchase tax three years ago, car sales soared in the world’s biggest auto market that is a key battleground for global car makers from General Motors to Toyota Motor.

CADA’s initiative comes as Beijing itself seems concerned about China’s auto industry, an important barometer of the health of the world’s second largest economy. It has launched stimulus measures as a bruising trade war with the United States is pressuring economic growth.

One of the people said the commerce ministry met with automakers this week to discuss the market and ways to spur growth, which included purchase tax cuts–a signal the central government may be warming to the idea.

“The overall car market is weak this year. Dealers I know are struggling to maintain their sales volumes as they feel pressure from both car makers and cash flow,” said the second person, a CADA official.

He confirmed the industry body had proposed to the two ministries to lower the purchase tax rate. “We asked for a 50 percent cut but any reduction could help.”

The first person, a CADA insider familiar with the plans, said the association was seeking a 50 percent cut to the purchase tax on cars with engines of 2.0 liter capacity or below, similar to the tax rebate on smaller-engine cars that helped drive rapid growth in 2016.

This person added it was unclear what the finance ministry and commerce ministry would do in response, but that the latter had met with car makers earlier this week to “discuss the performance of the auto market, sales trends and taxation.”

China’s Ministry of Finance and Ministry of Commerce did not immediately respond to requests for comment. The CADA insiders did not want to be identified because of the sensitivity of the matter.

CADA secretary general Xiao Zhengsan said the market might see a slight decline this year. He did not comment on the purchase tax cut proposal.

A spokesman for the China Association of Automobile Manufacturers (CAAM), Xu Haidong, said the nation’s top auto industry body had not proposed cutting the purchase tax.

China’s auto sales grew a steep 13.7 percent in 2016, in large part aided by the tax break, but started to slow when the tax rebate was phased out last year.

Its auto sales fell 3.8 percent in August and 4.0 percent in July, official data show. CAAM is set to release September sales data on Oct.12. A person with knowledge of the figures said “the situation is bad.”

China’s army of car dealers are caught in the middle, facing a build-up of inventory and having to slash prices to maintain their sales volumes.

“Almost everyone is doing the same thing,” said the manager of a car dealership in the southwest metropolis of Chongqing, asking only to be identified by his surname Li. “We lose money from selling cars…so if we sell too many cars, we will simply lose more money.”

Analysts said that without government support China’s auto market could slip to its first annual sales decline since as far back as the early 1990s, when the sector first started to take off and lure in global car makers.

Alan Kang, Shanghai-based senior analyst at consultancy LMC Automotive, cited “sluggish” retail demand, “bloated dealership stocks” and the escalating trade conflict for his firm revising down its outlook for market growth to -0.3 percent for the year.

Tax cuts could change that, at least in the short-term.

“Our view is that purchase duty cut policy would stimulate the market,” he said. “However, it simply pulls demand ahead from the years beyond, without actually creating new demand.”