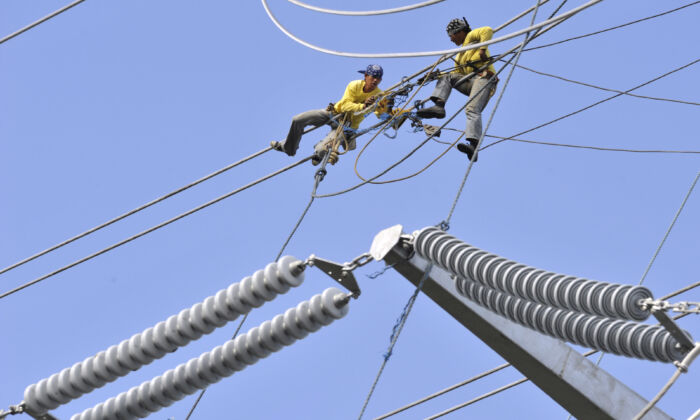 Linemen install cables on the Transco power transmission line in Santa Rosa town south of Manila as the Chinese-led consortium officially took over a 25-year concession of the Philippines' national electricity grid as part of the government's privatization program on Jan. 15, 2009. (Romeo Gacad/AFP via Getty Images)
By Nicole Hao

A Philippine senator has urged for a probe into the implications of China’s part-ownership of the national grid after an energy official said China could remotely switch off the country’s power supply.

Senator Risa Hontiveros filed a motion on Nov. 25, saying Beijing should not be able to destabilize a neighboring country “with the flick of a switch,” Reuters reported.

“Imagine a foreign country, which is an unrepentant trespasser and aggressor in our seas and territories, controlling our national electricity grid,” Hontiveros said in a statement, the outlet reported.

“It could sabotage our elections, shut down our access to television, the internet, and other communication technologies, cause the collapse of our economy and undermine our national security,” she added.

The move came less than a week after the head of the Philippines’ state-run National Transmission Corporation (TransCo) confirmed that China has the capability to remotely switch off the nation’s grid.

The two countries are involved in a territorial dispute over parts of the South China Sea.

According to the BBC, during budget deliberations on Nov. 19, Hontiveros asked energy officials: “Is it possible for our power grid to be taken down remotely?”

In response, Sherwin Gatchalian on Nov. 20, chair of the Philippines Senate Energy Committee, referred to advice from Melvin Matibag, president of TransCo.

“Given the technological advancement right now in telecommunications as well as in software, that is possible,” he said.

Gatchalian said in certain situations such as war, disasters, and rebellion, the president can order a takeover of the grid and electricity can be restored in 24 to 48 hours, the outlet reported.

Recent local media reports have said that only foreign engineers are able to troubleshoot, operate and control the grid’s power transmission network because its remote operating system is located in Nanjing, China.

Hontiveros asked about this issue and also about reports that grid operating manuals have appeared in Chinese.

Gatchalian said Filipinos were in control of the transmission line and that manuals had been translated to English.

An internal report to lawmakers also said the Chinese regime has the power to shut off the power grid “with a single switch,” CNN reported on Nov. 26.

On Nov. 26,  the NGCP denied the claims, saying it was “baseless” and “purely speculative.”

NGCP spokeswoman Cynthia Perez-Alabanza said on national television that the system was not connected to the internet and could not be accessed by remote users, the South China Morning Post reported.

However, local media have reported NGCP CEO Anthony Almedia saying that the head of the company could be granted remote access to the grid in emergency scenarios by using the system’s virtual private network.