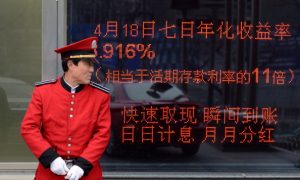 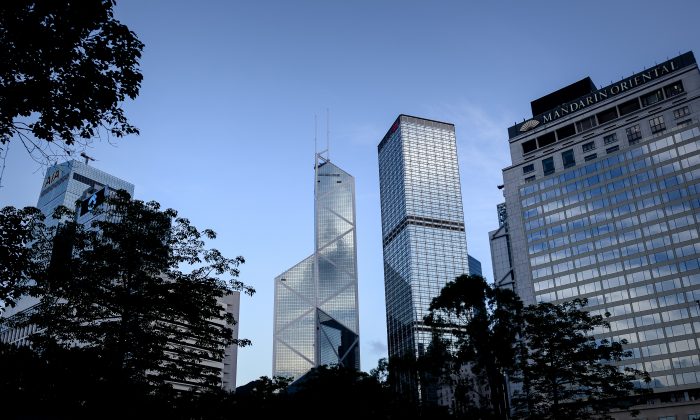 The Bank of China (C) is seen among other high rise buildings in Hong Kong's financial district on May 30, 2013. Chinese interbank lending rates have spiked recently, suggesting a full blown banking crisis is in the making. (Philippe Lopez/AFP/Getty Images)
Business & Economy

The LIBOR rate spiked sharply in 2008 before and immediately after the bankruptcy of Lehman Brothers in 2008, at the height of the financial crisis. A similar situation is currently playing out in China.

A credit crunch is escalating in China, a possible precursor to a full-fledged banking crisis that could harm the world’s second biggest economy.

Ominous signs usually emerge from the banking system, just like in the fall of 2008, when the Western financial system was on the brink of collapse. When banks don’t trust each other anymore, they charge higher rates for inter-bank lending, fearing that they might not get their money back. Since the Chinese banking system is fraught with bad loans, there are ample reasons to be skeptical.

So far government intervention has kept things under control; until now.

The current funding squeeze began in late May, and last Friday, the Chinese Ministry of Finance sold only 9.5 billion yuan in government bills out of 15 billion on offer. Buyers demanded higher than usual interest rates on the 9-month bills, and the failed auction was China’s second in only half a month.

Another worrying detail in this failed auction: The auctions are designed to drain liquidity from the system. If banks are not buying bills, it means they are hoarding cash on hand, a measure usually taken only in a high risk environment.

The best indicator of the distrust between banks is the Shanghai Interbank Offered Rate (SHIBOR), a Chinese version of the LIBOR, benchmarks the rate at which banks lend to one another in the Shanghai money market. The overnight SHIBOR has been on a see-saw lately, beginning at less than 3 percent annualized in April, rising to above 7.6 percent on June 19, and skyrocketing to more than 13.4 percent by June 20 close.

That’s an absurdly high rate for overnight money market and commercial paper. As comparison, it means that investors are more worried about lending to Chinese banks for 24 hours than they are lending to the Greek government for 10 years.

Why the sudden lack of liquidity? There are some valid reasons for the cash market tightening, including businesses having to pay taxes, and banks needing capital to meet capital requirements at the cut-off on June 30. The high rates we are seeing currently, however, present all-time records.

This implies the current crisis isn’t so cyclical in nature. Apparently, the People’s Bank of China (PBOC), its central bank, has been limiting the liquidity it pumps into the market as a way to cool off the recent lending craze, refusing to backstop Chinese banks’ lending activity as they had done before.

On June 6, China EverBright Bank defaulted on an interbank borrowing valued at 6 billion yuan. There are other reported cases of banks unable to pay interbank loans, which undoubtedly have contributed to rising rates. In the past, the PBOC funded Chinese banks through official means as well as off-balance sheet means, but given the recent bank defaults, the PBOC could have indeed tightened the supply of money, both officially and unofficially.

This largely unproductive lending has been supercharged by a so called “shadow banking system,” a lending network outside the banking system.

Chinese banks often engage in selling off-balance sheet structured products to individuals, high-yield wealth-management products, and other schemes which could involve fraudulent transactions, political corruption, and fake invoicing. In turn, Chinese banks are sitting on a mountain of bad debt—its own state regulator estimates the amount being 526.5 billion yuan, which is a conservative estimate.

“The earlier they (the PBOC) act, the lower the cost. If they waited longer, there would be more bad loans to deal with,” said Nomura Chief China economist Zhang Ziwei in a research note this week.

No Easy Answer
Perhaps the only constant in the world of finance is that no single trend can last forever. Included in China’s recent economic boom were government-sponsored economic subsidies that have created massive asset bubbles, which can only be maintained via even more lax monetary policy.

Its Producer Price Index last month decreased by 2.9 percent, down for the 15th month in a row. Because China’s economy is largely driven by its manufacturing engine this means that the country is likely suffering from deflation.

Chinese Premier Li Keqiang is in an unenvious position. He can continue to stimulate the economy to buy himself more time, exacerbating the current bank lending craze, or he can tighten monetary policy and risk a full-blown credit crunch and banking crisis. But given the high leverage of Chinese banks, even incremental increases in interest rates could have dire consequences.

China cannot afford to expand its money supply, and it also cannot tighten credit. It’s between a rock and a hard place and will have to be truly innovative to get out of this dire spot.