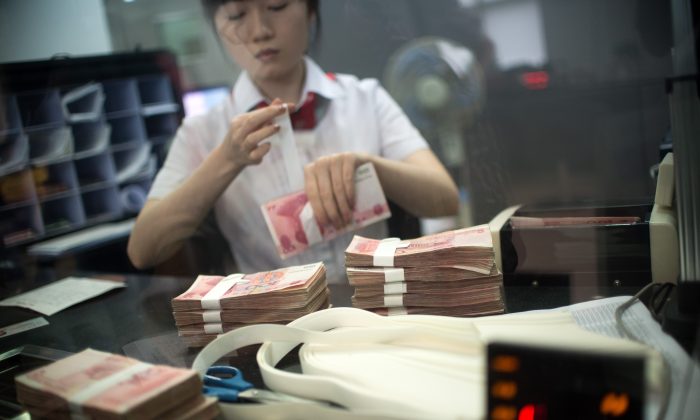 A worker of an Industrial and Commercial Bank of China Ltd (ICBC) branch counts money as she serves a customer in the China (Shanghai) Pilot Free Trade zone during a media trip on Sept. 24, 2014. (Johannes Eisele/AFP/Getty Images)

China became the “factory to the world” and built incredible infrastructure over the last three decades based on the strength of individual savers who remembered the hard times of the Great Famine of 1958–1962 that starved to death 30 million people.

Chinese leader Xi Jinping was successful in shriveling capital flight by running a ferocious anti-corruption drive that has netted up to 2.5 million officials at various levels, from ranged from what he referred to as the elite “tigers,” to the ordinary “flies.”

About two-thirds of Chinese savings are held in interest-bearing deposits at banks that loan the money out according to the “policy” dictates of the Communist Party leaders. The policy focus is to support state-owned enterprises that despite only representing 5 percent of industrial enterprises, receive 65 percent of bank loans, control $10.4 trillion of assets and dominate about 85 percent of the high-profit industries such as finance, power, energy, telecommunications and defense manufacturing.

But the before-tax profitability of the “factory to the world” fell from 5.7 percent in 2016, to 1.6 percent in 2017, and -6.9 percent in 2018. To finance these losses, China caps yields paid for bank interest-bearing deposits. Chinese savers who understand they are being short-changed on deposit earnings have been pulling cash out of banks, resulting in total bank deposits plunging from $16.62 trillion in 2016 to $14.81 trillion in 2018.

China was pushing hard to get more foreign direct investment to build new plants and buy more equipment to make up the domestic financing shortfall, but rising U.S. trade war tariffs and bans against Chinese technology firms like Huawei is driving foreign investors to move significant portions of their production facilities out of China. This growing cash crisis has kicked off a new round of capital that has spiked up in 2019 to an annual rate of about $139.2 billion, according to Enodo Economics.

The Central Commission for Discipline Inspection is retaliating by stepping up its efforts to fight capital flight as evidenced by the August 1 announcement that one of China’s biggest “tigers,” former chairman of the China Development Bank Hu Huaibang, is being investigated for suspected serious violations of discipline including bribes.

The two actions to stop a rising balance of payments crisis are to dramatically raise interest rates to put the brakes on borrowing and drive unprofitable state-owned-enterprises into bankruptcy, or to devalue the exchange rate of China’s currency and tank domestic stock and bond asset prices.

But raising interest rates would also cause tens of millions of job losses and crush China’s wildly inflated real estate asset prices; while devaluing China’s currency would cause the trade war to spread internationally as other countries erect retaliatory tariffs against China.

The Chinese leadership has been unwilling to make either of these tough choices, because inflicting huge amounts of economic pain on “the people” would threaten the Communist Party’s mandate to rule. But as the balance of payments crisis intensifies, the economic pain necessary to resolve the crisis will grow exponentially.