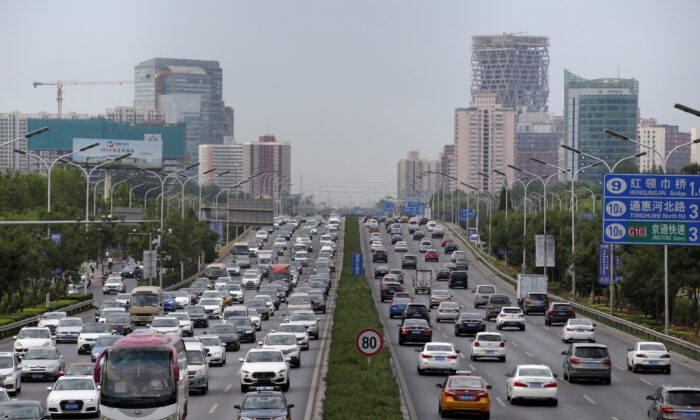 Cars drive on the road during the morning rush hour in Beijing on July 2, 2019. (Jason Lee/Reuters)
China

SHANGHAI—A slump in commercial-vehicle demand led China’s automobile industry association on Monday to downgrade its sales forecast, as anti-pandemic measures weighed on the economy and its car market, the world’s largest.

The industry will sell 27 million cars this year, up 3 percent on 2021, the China Association of Automobile Manufacturers forecast, cutting its outlook from the 27.5 million sales and 5.4 percent growth it predicted in December.

The auto sector has been hit hard in recent months amid rising COVID-19 cases. The Chinese regime has at times put many parts of the country, including Shanghai, under stringent lockdown.

Authorities have tried incentives to revive demand, with the central authorities last month halving purchase tax to 5 percent for cars priced at less than 300,000 yuan ($45,000) and with engines no larger than 2.0 liters.

Many policies have been aimed at encouraging sales of new-energy vehicles (NEVs). In May and June, some local authorities began offering subsidies for trade-ins of gasoline vehicles for electric cars.

Some cities have also expanded quotas on car ownership.

Such policies helped create an annual rise in sales seen in June, following four months that showed falls. The industry sold 2.5 million vehicles in June, up 23.8 percent on a year earlier, the association said.

June sales were also up 34.4 percent from May, with sales of NEVs—among them electric, plug-in petrol-electric hybrids, and hydrogen fuel-cell vehicles—climbing 129.2 percent from a year before.

While it cut its annual projection for overall sales, the association revised up its forecast for NEVs, saying 5.5 million units would probably be sold, up more than 56 percent and compared with last year’s 47 percent growth. Passenger car sales for the year would likely rise about 7 percent.

Although June sales were buoyant, there are concerns that demand will once again be hit as COVID-19 cases tick up with the arrival of the BA.5 Omicron subvariant in China and cities impose new restrictions.