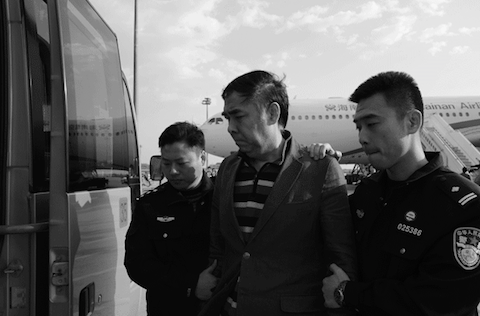 Pang Shunxi (C) is brought back to China by a security detail on March 28, 2015. (Larry Ong/Epoch Times)
China

Editor’s note: The anti-corruption campaign surging through China is the most significant political event in the country’s recent history. Led by Chinese Communist Party chief Xi Jinping and his deputy Wang Qishan, it has heavily targeted officials closely tied to Jiang Zemin, for years the Party’s behind-the-scenes godfather. These include the punishing takedowns of officials like Zhou Yongkang, Su Rong, Xu Caihou, and others. Along with the arrests of those “tigers,” as they are called in official parlance, the campaign has been swatting “flies”—officials at a lower rank who engage in corruption—across the country. This regular column documents Xi Jinping’s war against corruption in the Party as events take place.

Barely four days after it was announced, the Party’s new anti-corruption operation against absconded officials has two in the bag.

Top Tianjin officials Pang Shunxi and An Huimin were arrested on March 28 in Laos and flown back to China as part of the “Sky Net” initiative, according to the website of the Central Commission for Discipline Inspection—the Chinese regime’s anti-corruption agency.

A high-profile report featuring many pictures of the men’s arrest states that the pair have been charged with graft and are currently being investigated by the Hexi District Prosecutor’s Office in Tianjin.

Pang is the Secretary of the Tianjin Municipal Office, State Administration of Taxation, while An, who was once hailed as a “model worker,” is the general manager of Tianjin-based Han International Trade Co., Ltd., a joint-stock company controlled by the prominent Tianjin Materials Group.

Both men are close associates of Vice Premier Zhang Gaoli, the third-highest ranking official in the Chinese regime. Zhang oversaw one of the worst persecutions of Falun Gong when he was in charge of Shandong, the province with the third highest number of practitioners killed according to the World Organization to Investigate the Persecution of Falun Gong.

Former security boss Zhou Yongkang could be the highest-ranking Party official to face the gallows, according to Mingjing news website.

Ming Jing is an outlet run by overseas Chinese that frequently traffics in political rumors and scandals in the mainland and sometimes appears to have an inside line to the Xi Jinping administration. It claims that the top brass in Beijing is seriously considering issuing the death sentence to Zhou, but are not yet unanimous in this decision.

In comparison, Bo Xilai, the once powerful Chongqing boss whom Zhou reportedly hatched a coup attempt to overthrow Xi with, was sentenced to life in prison.

Zhou, the biggest “tiger” to be brought down in Xi Jinping’s anti-corruption campaign, was expelled from the Party in December and is being formally investigated for a long list of crimes.

If Zhou is truly sentenced to death, he will be the highest-ranking Party official to be executed for corruption in the Chinese regime’s history—Cheng Kejie, the former vice-chairman of the Standing Committee of the National People’s Congress, currently holds the macabre honor.

Murders of Mistresses Often Linked to Officials in China

The more scandalous bits of Ma Jian’s corruption are out.

The former deputy minister of China’s Ministry of State Security had six mistresses and two sons by them, as well as up to six villas in Beijing, according to Chinese newsmagazine Caixin.

Two of Ma’s mistresses worked for the ministry, Caixin reports. The publication regularly acts as a mouthpiece for the Wang Qishan-led anti-corruption campaign, publishing details of investigations. Wang is known to have long been friends with editor-in-chief Hu Shuli.

In January, the Central Commission for Discipline Inspection announced that Ma, who was said to be in charge of the regime’s counterespionage operations, was being formally investigated for corruption.