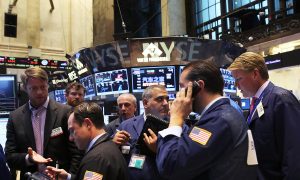 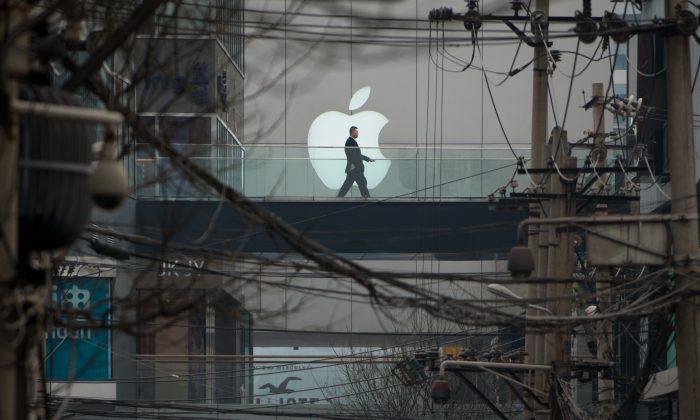 A man walks past an Apple logo displayed above a street at a shopping mall in Beijing on March 29, 2013. (Ed Jones/AFP/Getty Images)
China

Using a loophole in the WTO's clause on national security threats, Beijing has effectively banned foreign competition
By Joshua Philipp

The Chinese Communist Party has created a new law that allows it to selectively ban foreign imports while propping up its own companies. The new law uses a loophole in world trade, and could push U.S. technology companies out of China.

It was bundled in the new “national security law,” passed unanimously by the National People’s Congress, China’s faux legislature. It covers nearly every facet of Chinese society, as well as its military interests in deep sea, polar regions, and space.

The clause that has gotten the most attention, however, is one aimed at foreign technology companies. It says all key network infrastructure and information systems in China need to be “secure and controllable.”

The new rules “would require any company operating in China to turn over to the government its computer code and encryption keys, as well as to provide a backdoor entry into commercial computer networks,” states an analysis from the U.S.–China Economic and Security Review Commission.

“I don’t think there’s any doubt about the goal,” said Robert Atkinson, president of the Information Technology and Innovation Foundation, a Washington-based think tank.

This is only possible, he said, because the authorities found a loophole in the World Trade Organization’s (WTO) rules on protectionism.

Protectionism is when countries use government measures to protect their own industries from foreign competition. It’s banned under the WTO, with a crucial exception: Countries are allowed to ban certain imports, if those imports pose a national security threat.

“Basically, the WTO has a set of rules that says you cannot discriminate against imports because of free trade, but if you think there’s a threat against your national security because of an import, this is exempt under the WTO rules,” Atkinson said.

The rules were not intended to be used broadly, but as Atkinson noted, “The Chinese government has spent an enormous amount of time understanding the actual rules and laws of the WTO so anything they do doesn’t run afoul of the WTO.”

The Chinese regime has been trying to push out foreign technology firms it believes its domestic companies can replace. It has banned products from companies including Microsoft, Apple, and Cisco from being used in government offices—which under China’s system of state-run companies includes a large portion of the Chinese market.

“The Chinese essentially want a closed loop where Chinese companies are making these things for China,” Atkinson said, “and the security provisions in the national security law are one of many, many tools the Chinese government is implementing to achieve this goal.”

It ties into a system that includes military hackers who steal product designs and trade secrets from U.S. companies, as well as other programs meant to build a high-tech economy in China.

Some of this has been taking place for years. In 2006, for instance, authorities rolled out the National Medium to Long-Term Plan for the Development of Science and Technology.

The 2006 program “mandates that in order to sell in China you must transfer technology to Chinese companies,” Atkinson said. There are many other existing programs with similar purposes, including Project 863 and the Torch Program.

The new national security law advances these systems, and is one of three pieces of similar legislation—two of which are still pending yet are expected to be passed soon. One places foreign nongovernmental organizations under the control of the Ministry of Public Security; the other is a “counterterrorism law” with similar programs to regulate foreign companies.

The impact on business under the new national security law will likely be felt globally, according to Greg Autry, co-author of “Death by China” and a senior economist with the Coalition for a Prosperous America.

“It will definitely reduce trade which will definitely hurt people around the world,” Autry said, noting that the U.S. companies will likely be hit the hardest since the Communist Party is more likely to list them as national security threats.

Many companies will likely be left with two choices: bow to the new rules or leave China.

Unfortunately for U.S. companies, there may be little they can do about it. The United States and other countries have also used the WTO national security rule to deny markets to other nations, although on much smaller scales.

Related Coverage
Encouraged by the State, Chinese Put Everything at Risk With Margin Trading

While the U.S. moves could be justified, due to the opaque nature of the Party control of Chinese industries, the Chinese regime has similar cards up its sleeve, thanks to leaked information about U.S. spying programs under the NSA.

“Everybody does it,” Autry said. “The Chinese just do it much more strategically.”

While the new standards could prop up Chinese companies and allow them to compete more in the international market, Autry noted that the insulated system it creates for Chinese companies may harm them in the long run.

The new rules are also telling of the stability of the one-Party rule. Autry said domestic security laws suggest the regime believes its rule is at risk, and the economic laws suggest “the economy is a lot weaker than they’re saying.”

“I think it’s a sign of weakness,” Autry said, noting that the national security law itself is “a step back toward Marx.”