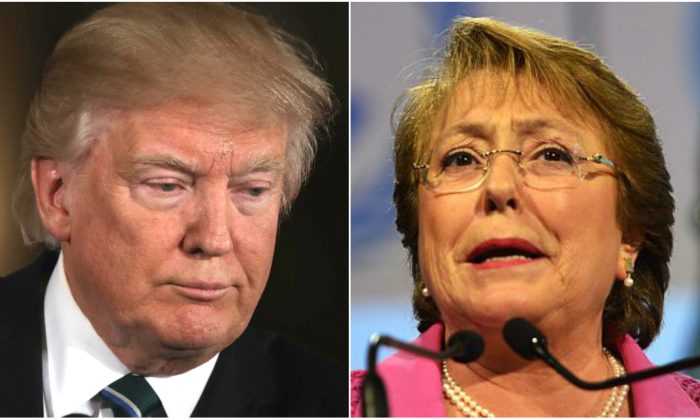 SANTIAGO—U.S. President Donald Trump expressed concern about the political and humanitarian situation in Venezuela in a call on Sunday with Chilean President Michelle Bachelet, the Chilean president told reporters on Monday.

Bachelet said she talked with Trump about the actions regional leaders were taking with regard to Venezuela, which has been wracked by an economic crisis in the last three years and is facing external pressure to make political reforms.

“(President Trump) presented to me his worries about the situation in Venezuela,” Bachelet told reporters at the La Moneda presidential palace in Chile’s capital, Santiago.

“I told him about the actions (Chile’s) foreign ministry is carrying out together with other foreign ministries, and we are staying in contact to see how we can help Venezuela have a peaceful exit from its domestic situation.”

Venezuelans are suffering from severe shortages of basic goods, including food.

The government of Nicolas Maduro blames private businesses for sabotaging the economy with price speculation and routinely denounces opposition activists as coup-plotters, intent on bringing down socialism in the country.

Opposition leaders say the Maduro government has undermined democracy by canceling a key referendum and delaying local elections, among other measures.

Last week, Luis Almagro, secretary general of the Organization of American States, said Venezuela should be suspended from the organization if it does not hold general elections as soon as possible.

Relations between Venezuela and the United States have been rocky since former socialist president Hugo Chavez rose to power in 1999. The South American country has repeatedly criticized the United States for interfering in its domestic affairs.

The U.S. blacklisted Venezuela’s vice president as a drug trafficker in February, and Trump later that month called for the release of jailed opposition leader Leopoldo Lopez.