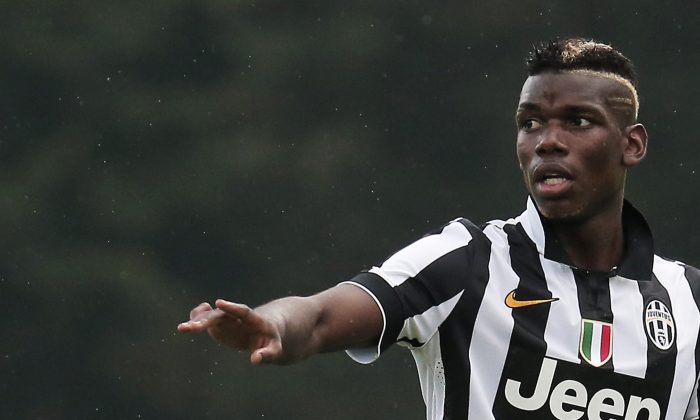 Juventus A' midfielder paul Pogba gestures during a friendly football match between Juventus A and Juventus B in Villar Perosa near Turin on August 20, 2014. (MARCO BERTORELLO/AFP/Getty Images)
Europe

Chievo and Juventus are set to meet in a Serie A match on Saturday, August 30.

Chievo are 7/1 to win the match, as compared to 6/11 for Juventus, according to OddsChecker.

See an AP preview of the weekend’s Series A action.

Conte Departure From Juventus Could Alter Serie A

ROME—The Italian league opens this weekend with a full slate of matches, a couple key coaching changes and some notable absences.

Three-time defending champion Juventus kicks things off at Chievo Verona on Saturday, followed by an enticing matchup of runner-up Roma hosting Fiorentina, which is coming off a fourth-place finish.

The eight other matches are scheduled for Sunday, with AC Milan playing Lazio at the San Siro and Inter Milan visiting Torino. Also, Napoli faces Genoa four days after getting eliminated from the Champions League playoffs.

Here are some things to know about Serie A:

For the third straight season, Serie A is opening without its leading scorer from the previous campaign.

Ciro Immobile, who led the league with 22 goals last season at Torino, transferred to Borussia Dortmund.

Edinson Cavani, who led Serie A with 29 goals in 2012-13, then left Napoli for Paris Saint-Germain.

In Paris, Cavani joined Zlatan Ibrahimovic, who topped the chart with 28 goals for AC Milan in 2011-12 before he went to PSG.

With Mario Balotelli having left Milan for Liverpool, there’s a small group of contenders to lead the chart this season. They include Carlos Tevez at Juventus, who should be motivated after being left off Argentina’s World Cup squad; fellow Argentine Gonzalo Higuain at Napoli; 36-year-old Antonio Di Natale with Udinese; and 37-year-old Luca Toni at Hellas Verona.

When Antonio Conte resigned from Juventus suddenly in mid-July, it may have altered the balance of Serie A.

Conte was widely considered the driving force behind the Turin club’s run to three straight titles and his replacement, former AC Milan coach Massimiliano Allegri, has a much more laid-back personality.

Meanwhile, former Milan great Filippo Inzaghi has taken over the Rossoneri from Clarence Seedorf, who was fired shortly after last season.

Vanishing spray will be used by referees in Serie A this season after its successful introduction at the World Cup in Brazil.

Referees will mark a line on the grass 10 yards from the ball to stop defensive walls from encroaching and also the spot where balls should be placed for free kicks.

The white foam is made to disappear within one minute after being sprayed.

While there have been very few big-name players to join Italian clubs this offseason, that could change in the final days of the transfer market, which closes Monday.

Juventus is reportedly interested in signing Colombia forward Radamel Falcao from Monaco, perhaps on loan, and Milan would like to bring in Spain striker Fernando Torress from Chelsea to replace the departed Balotelli.

Roma captain Francesco Totti has promised to give up gelato for an entire year if the Giallorossi win the title this season.

Totti will turn 38 in September and is entering his 23rd season with his hometown club, which is considered Juve’s top challenger this campaign.

Speaking on Roma’s own radio station, Totti was asked if he would give up eating Nutella if Roma takes the “scudetto.”

“How about gelato for a year?” Totti responded.

Claudio Pica, the secretary of the Italian gelato association and a Roma fan himself, was not amused.

“Gelato should always be part of the daily diet,” Pica said. “Many doctors and diet specialists recommend it for athletes and elderly people. So if Roma finishes first we would be happy to offer free gelato to Roma and its athletes.”