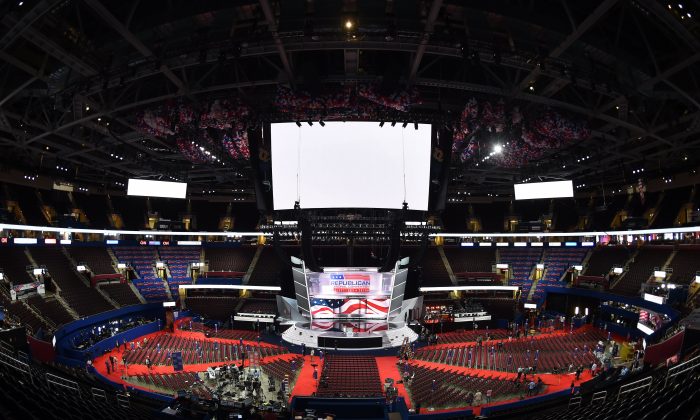 The stage in the hall at the Quicken Loans Arena on July 16, 2016, as workers prepare for the arrival of visitors and delegates for the Republican National Convention in Cleveland, Ohio. (Timoty A. Clary/AFP/Getty Images)
US

Chief: Seems Everyone Coming to Cleveland to Rally, Protest

CLEVELAND—Cleveland Police Chief Calvin Williams says it seems “everyone is coming” to the city to exercise their First Amendment rights.

The Republican National Convention starts Monday, and Williams said in a Sunday appearance on CBS’ “Face the Nation” he expects groups of all stripes to be vocal throughout the four-day convention when reality TV star and businessman Donald Trump presumably will be named the party’s nominee for president.

Williams says he’s hearing that anarchists, separatists, anti-Trump protesters, “everyone is coming to Cleveland to protest or exercise their First Amendment rights.”

He acknowledged Ohio’s open-carry gun law in assuring his force is committed to public safety, and said scenarios like the recent slayings of five Dallas police officers had already been included in police preparations.