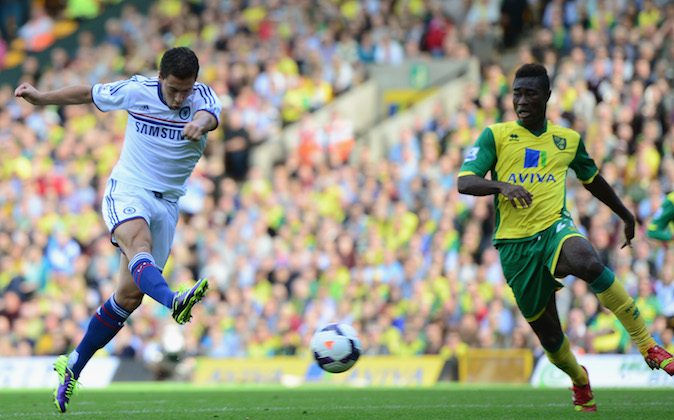 Eden Hazard of Chelsea scores their second goal during the Barclays Premier League match between Norwich City and Chelsea at Carrow Road on October 6, 2013 in Norwich, England. (Photo by Jamie McDonald/Getty Images)
Webstream

The Chelsea vs Norwich City EPL match is set for Sunday, May 4.

The game will be broadcast on Sky Sports 1/HD and Sky Sports 1 Ireland in the United Kingdom.

Here is an AP column on Chelsea’s title chances.

Now Mourinho needs Lukaku to score against City on Saturday to ensure his first year back at the west London club doesn’t end without a trophy. Should City and Liverpool lose, a victory over Norwich on Sunday would see Chelsea go into the final round of matches with a one-point lead at the top.

“There is still a chance so we can’t be sorry for ourselves,” goalkeeper Mark Schwarzer said after Chelsea’s Champions League semifinal loss to Atletico Madrid.

Chelsea’s attacking shortcomings were highlighted by Atletico, three days after pulling off the surprise win at Anfield with well-disciplined defensive tactics.

“We have to pick ourselves up from this disappointment and realize we must keep banging on the door with the game against Norwich,” Schwarzer said.