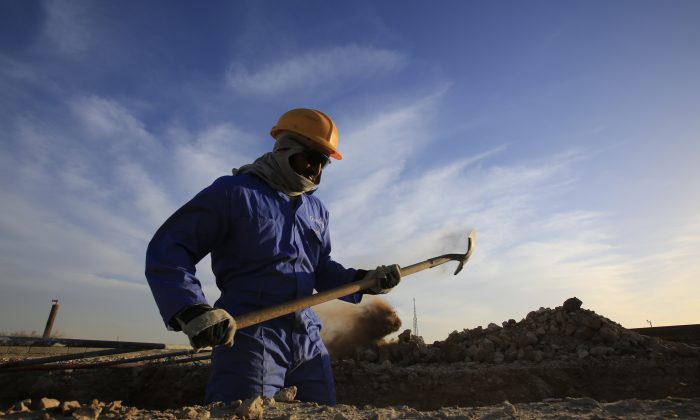 An oil worker shovels at a facility site in the desert oil fields of Sakhir, Bahrain, Monday, Dec. 7, 2015. U.S. stocks are dropping in early trading Monday as investors dump energy companies on lower oil prices. Benchmark U.S. crude is trading near its closing low for the year following a decision by OPEC last week not to cut production. (AP Photo/Hasan Jamali)
Business & Economy

DALLAS—Oil prices have been lower for longer than expected. Now, with OPEC’s decision to keep pumping at current levels, analysts expect oil to remain relatively cheap well into 2016 and maybe longer.

That, of course, is good news for consumers and fuel-guzzling industries like airlines, but oil producers are being squeezed and thousands of workers in the oil patch have been laid off.

The price of a barrel of oil fell Monday to $37.65, a nearly seven-year low. Energy stocks, from giants Exxon and Chevron down to independent producers, took a beating.

What’s causing the upheaval? Simply put, supply and demand are out of synch, and that’s causing ripples across economies, creating winners and losers.

Meanwhile, economic growth has been slower than expected, undercutting demand for energy. China’s economy has slowed, Japan is in recession, and Europe continues to struggle. The U.S. economy is growing, but more-efficient cars have blunted the need for more fuel.

The U.S. government predicts U.S. production will drop 6 percent next year as oil companies curtail unprofitable projects. Globally, “it could take well into 2017 to work off the surplus inventory,” Dwarkin said.

Motorists see the effect of cheaper crude every time they fill up. According to AAA, the national average price for a gallon of regular gasoline on Monday was $2.03 and should soon drop below $2 for the first time since 2009. Gas is already below $2 at nearly two-thirds of the nation’s 130,000 gas stations, according to the price-watching site GasBuddy.com. A gallon of diesel is more than $1 cheaper than at this time last year, benefiting shippers.

Tom Kloza, chief oil analyst for Oil Price Information Service, says the nationwide average could drop as low as $1.75, before turning around in the spring, possibly going as high as $2.75 in time for driving season.

All that pocket change and low interest rates are leading many consumers to splurge on new cars, particularly bigger ones. SUV sales have jumped 45 percent since November 2012, when gas was around $3.63 a gallon. But car-buying in key oil states has tailed off, according to IHS Automotive. New vehicle registrations in Texas and North Dakota rose just slightly this year through September, after outpacing the nationwide growth in the boom oil years.

Saving on gasoline could improve shoppers’ holiday spirit. Cheaper gas “frees up money that could be spent elsewhere, so that’s a plus for holiday shopping,” said Scott Hoyt, senior director of consumer economics at Moody’s Analytics.

Cheap oil also translates to lower heating bills. The average household using heating oil will spend $1,360 this year, $493 less than last winter, according to the EIA.

Big airlines such as American, United and Delta burn billions of gallons of jet fuel every year, and savings from cheaper fuel are helping them post record profits. Thanks to cheaper fuel, travelers are seeing a slight drop in average airfares after five straight years of fares rising faster than inflation.

Oil companies, their employees, and their subcontractors are feeling the pinch from lower prices. Profits are down at the majors such as Exxon Mobil Corp. and Chevron Corp., but independents are suffering more.

“Exxon is not going to go out of business even if oil goes down to $10,” said Fadel Gheit, an energy analyst for Oppenheimer. But many smaller independents will be forced to consolidate because they can’t handle the higher costs of acquiring acreage, expensive drilling technology and declining fields in the U.S., he said. “It can’t get any bleaker.”

According to government figures released Friday, the energy and mining sector — that’s mostly oil and gas exploration and production — has lost 122,300 jobs in the last year. Paychecks for those still employed are smaller: Average wages in the energy industry have fallen 1.5 percent at a time when other workers are earning slightly more than they did a year ago.

Several energy-producing states, such as Alaska, mapped out budgets based on oil at $50 to $60. Their plans are crumbling now that crude prices are around $40. Natural gas prices also are down sharply and the future for coal looks bleak. In North Dakota, overall revenues are 7.5 percent lower than were expected for the two-year budget cycle that began July 1.

Overseas, collapsing oil prices have undercut exports and the economy in Venezuela, leading to shortages of goods and contributing to the ruling socialist party’s defeat in legislative elections Sunday. In Russia, the government budgeted its spending on $50 crude. Its oil-dependent economy is expected to shrink 3.4 percent this year, according to the International Monetary Fund. On Monday, the ruble fell 1.3 percent against the dollar to a three-month low.