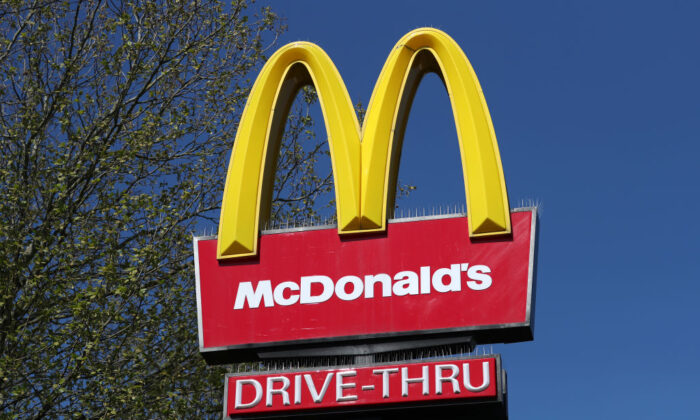 A McDonalds' restaurant sign is seen as the restaurant is closed due to the COVID-19 pandemic on April 19, 2020 in Southampton, England. (Naomi Baker/Getty Images)
Stocks

Chart Wars: McDonald’s to $282, Starbucks to $136—Which Stock Will Reach All-Time Highs First?

McDonald’s Corporation and Starbucks Corporation have both formed long-term bullish chart patterns that could provide massive upside for the long-minded trader and investor.

McDonald’s is trading in a strong weekly uptrend and Starbucks has formed a bullish cup-and-handle pattern on the weekly chart, with both stocks showing signs further upside could be in the cards. On Monday, both stocks looked to be providing a potential buy-the-dip opportunity if their bullish patterns are to continue.

It should be noted that events such as the general markets turning bearish, negative reactions to earnings prints and negative news headlines about a stock can quickly invalidate bullish patterns and breakouts. As the saying goes, “the trend is your friend until it isn’t,” and any trader in a bullish position should have a clear stop set in place and manage their risk versus reward.

McDonald’s reached a new all-time high of $270.73 on Monday morning after Piper Sandler analyst Nicole Miller Regan upgraded the stock from Neutral to Overweight and hiked the price target from $232 to $282. On Dec. 28 Tigris Financial maintained a Buy rating on the coffee chain’s stock and raised its 12-month price target to $136.

If McDonald’s and Starbucks were to reach their targets, it would mean an increase of about 6 percent and 18 percent, respectively, but because McDonald’s is closer to its target it makes the stock more likely to reach there first.

When McDonald’s printed its all-time high on Monday, it also printed its next higher high in its uptrend, after printing a higher low on Thursday at the $258.43 mark.

The stock then fell 1.82 percent lower to cool down its relative strength index (RSI), which was spiking into overbought territory at about 70 percent. McDonald’s may need to print its next higher low in order to further cool the RSI.

On Monday, Starbucks made an attempt to break up from the neckline of a bullish inverted head-and-shoulder pattern on the weekly chart but met resistance at a gap between $117.47 and $118.36.

The stock may need another day or two to garner enough power to make another attempt at the break and receive bullish momentum in the sign of higher-than-average volume to confirm the pattern.

The move lower on Monday was on lower-than-average volume, which indicates consolidation as opposed to the bears being in control.