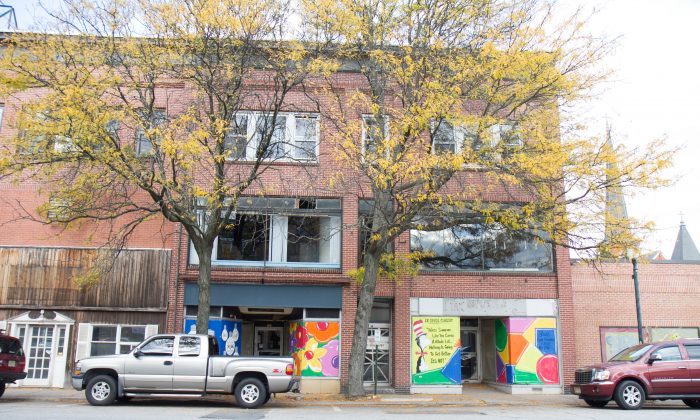 PORT JERVIS—Port Jervis Mayor Kelly Decker said he didn’t want to call it a renaissance for the downtown, but he was excited that two big buildings on Front Street had buyers who were serious about renovating them.

Built in 1936, 24-32 Front Street was going to be torn down because of the structural damage that resulted from years of neglect.

“That’s the type of atmosphere that we want living in our downtown area,” Decker said.

He acknowledged that Blanton had an uphill battle to acquire it though.

The roof of the building blew off in 2014 and the current roof would not last another winter.

Blanton is aware of the situation, Decker said, and is facing the looming deadline to not only repair it, but to acquire the title by Dec. 1, a date set by the city council.

Before he can acquire the title, however, he must get it to a point where it meets the approval of the city’s engineer, which could mean repairing the roof before he even owns it. “That would be an option that he would have to weigh,” Decker said, adding that “he seems very committed in trying to save the building.”

The city would forgive over $47,800 in taxes and construction costs owed on the building because, while tax payers would lose money in the short term, it would save them possible hundreds of thousands of dollars in the long term to tear it down and from the lost revenue in taxes if the city were not able to sell it.

“We are preserving the downtown and the integrity of our downtown Front street if Mr. Blanton is allowed to move forward with this, and we are reducing our potential for further debt on this building,” Decker said.

The city is in talks with two men, David Krantz and Sean Donnelly, who are interested in developing 46-48 Front Street into a microbrewery on one side and a bar and restaurant on the other.

While the building will need some serious renovation, it doesn’t have the time pressure that 24-32 does. Their deadline is Nov. 1 of 2016, and Decker said they hope to have the building in a condition to be able to open within a year.

The building was built in 1927, according to tax records, and has 3 stories.

The back wall will have be replaced because, while the city repaired it four years ago to keep it from falling down, the wall was only supposed to last one year.

The city is forgiving over $118,000 in taxes and construction costs to repair the wall, but like the other building, they see it as an investment into the future of the downtown.

Decker said he has been impressed with the “meticulousness” of Donnelly and Krantz and is confident they will follow through once the property is sold to them. The city currently owns the building.

Decker called plans for the two buildings and others in the works a “revitalization” of the downtown and said they are having a snowball effect by “bringing other people into the area interested in other buildings.”