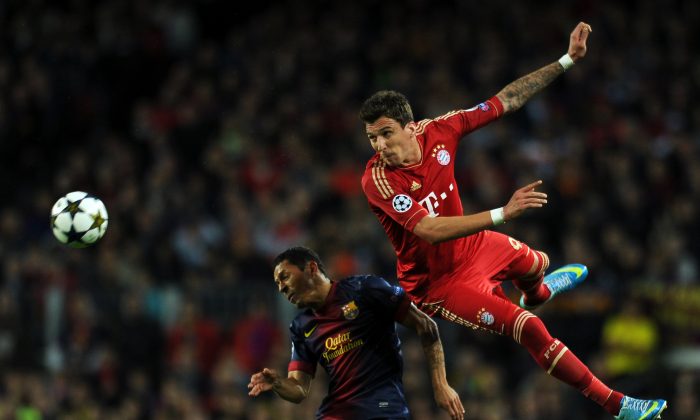 Bayern Munich made it an all-German Champions League final at Wembley Stadium in London, England on May 25 with an emphatic 3–0 win against FC Barcelona at the Nou Camp in Barcelona on Wednesday. Bayern will face Borussia Dortmund who hung on to beat Real Madrid on Tuesday 4–3 in aggregate.

Bayern Munich won the first leg 4–0 on April 23 in Munich, leaving a very tall order for the 2011 Champions League winners Barcelona. Bayern knew that scoring one goal would mean Barcelona would have to respond with six in order to reach the final.

The big news at the start of the match was that Lionel Messi would not start. Considered by many to be the game’s best player, Messi was ineffective in the first leg in Munich and was likely judged to not be fully fit to play 90 minutes. He had recently suffered a hamstring problem and didn’t wind up seeing any action at all on this night.

It was a display of superb defending and attacking from the Germans who could afford to play with confidence knowing they had a significant cushion. They counterattacked effectively in the first half, notably through Dutchman Arjen Robben down the right flank.

Barcelona came up with some key defensive stops to prevent the Germans from taking a lead in the first half, but the second half was simply all Bayern Munich.

Bayern began by pressuring Barcelona consistently in their own half making it difficult for the Spaniards to play their short passing buildup game. The Germans covered all spaces on the pitch, but did not engage in excessively physical play.

The Germans always looked comfortable behind the ball and Barcelona was unable to break through down the middle. Their wing play was ineffective as they didn’t have strength in the air to threaten the German central defenders who calmly cut out any crosses that were sent in.

Robben gave Bayern the lead with one of his typical goals. In the 49th minute, he cut in from the right side of the 18-yard box onto his left foot and curled a shot into the far side of the net past a helpless Victor Valdes.

But the Germans weren’t done. With stretches of possession, they took advantage of Barcelona’s broken spirits.

Adding insult to injury, central defender Gerard Pique scored in his own net attempting to clear a cross. Pique’s clearance ended up looking like a world-class striker’s volley into an opposing net.

And less than five minutes later, French winger Franck Ribery found German Thomas Muller at the far post with deft cross. Muller made no mistake to cap the remarkable result.

Bayern Munich heads to their third Champions League final in four years. They lost to Chelsea last year in Munich and to Inter Milan in 2010. Their opposition, Borussia Dortmund, made their first return to the final since 1997 when they beat Juventus.