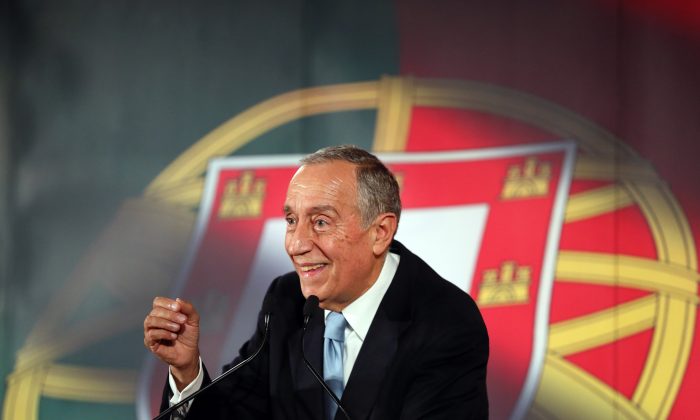 Marcelo Rebelo de Sousa smiles while addressing supporters during his presidential election campaign in Lisbon on Jan. 20, 2016. A poll published Friday, Jan. 22, 2016, in weekly Expresso suggested Rebelo de Sousa, a veteran center-right politician who became a popular television personality, will collect more than 50% of votes against nine rivals in the Jan. 24 Portuguese presidential election. In Portugal the president has no executive power, which is held by the government, but is an influential voice. (AP Photo/Armando Franca)
Europe

Opinion polls have suggested Marcelo Rebelo de Sousa will collect more than 50 percent of the vote against nine rivals, some of whom are splitting the left-of-center vote.

His strong poll lead in recent weeks and the head of state’s mostly ceremonial role has meant the election has largely failed to capture the public’s imagination.

Executive power is held by a Socialist minority government which, with the backing of the Communist Party and the radical Left Bloc, is scrapping austerity measures introduced after a recent financial crisis. The government’s critics say that is a risky policy in debt-heavy Portugal whose economy is struggling to gain momentum.

Rebelo de Sousa is a moderate who says he wants to build bridges between political parties and won’t rock the boat.

His two closest rivals in the race are Antonio Sampaio da Novoa, a former university dean, and former Socialist health minister Maria de Belem. Both of them are close to the government, and polls suggested they each would get fewer than half the votes of the favorite.

The most recent poll was published Friday in newspaper Publico and suggested Rebelo de Sousa will collect 52 percent of the vote. The poll by Intercampus was conducted Jan. 14-20, with 1,043 people interviewed in person and had a margin of error of plus or minus 3 percentage points. Previous polls showed similar results.

The winner will take over from Anibal Cavaco Silva, who has served the maximum of two five-year terms.