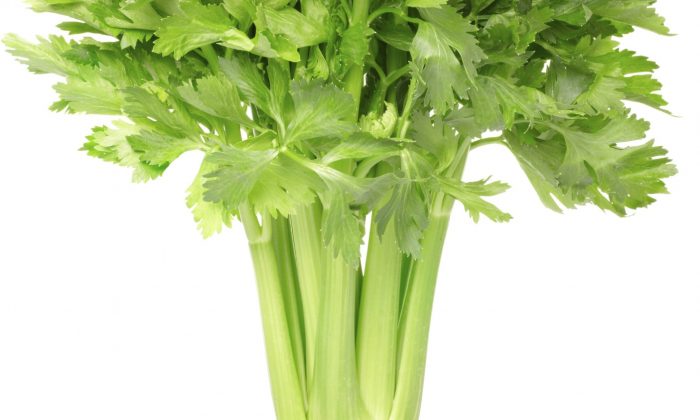 “Let food be thy medicine and medicine be thy food.” So goes the well-known quote attributed to Hippocrates, the ancient Greek physician who is sometimes referred to as the father of Western medicine. Whenever we include celery in our meals, we are doing just what Hippocrates advised.

Most people think of celery as a common vegetable rather than a medicinal herb. Herbal medicine is in effect a concentrated form of good nutrition that is classically administered in greater amounts than those you would expect from a healthy meal.

Celery has the effect of rebalancing the acid and alkaline levels in the body. With balanced proportions of sodium to potassium, celery will stimulate the excretory organs of the kidneys, bowels, and skin, as well as the liver.

The plant contains vital minerals for nerve function, including magnesium, which has an alkaline reaction in the body, and will calm and support physical nerve function irritated by acid-waste build up.

Silica, necessary for fast and uninterrupted nerve function, is also present and further assists the speedy excretion of acid wastes from the body. Vitamins A and C can also be added to the list.

B Vitamins and Minerals

The line between medicinal and culinary uses for celery becomes clearer when we consider the nutritional value of the seeds, which contain all of the vitamins and minerals present in the leaves in greater amounts and with the added bonus of the B vitamins, phosphorus, and calcium.

Also present are sulfur compounds, which act as an alterative through the blood and bowels, and iron salts, which help to burn out cell wastes.

Tea for Arthritis and Diabetes

Tea made from celery seeds provides a powerful mineral combination for those suffering from rheumatoid arthritis and osteoarthritis. A level teaspoon of the dried seeds is sufficient for one cup.

Especially for osteoarthritics, celery-seed tea should be introduced slowly, a cup every few days or as prescribed by your herbalist. The silica contained in the seeds is very effective at breaking down insoluble calcium deposits in arthritic joints, a process that can cause discomfort upon elimination if rushed.

Patient persistence rather than an instant fix, and less rather than more, is often the approach required to remedy lifelong patterns of disease.

Celery-seed tea is also useful as an occasional beverage for diabetics who may begin to retain more fluid as worries and life’s stresses increase. For such people, weight gain is not about fat, but rather more to do with fluid retention resulting from adrenal overload and digestive difficulties.

Celery can be effective for diabetics, as it does not raise or lower blood sugar levels and is sympathetic to pancreatic function.

Celery is usually the main ingredient in vegetable salt, and unlike mineral salt, the vegetable form of sodium chloride does not cause fluid retention or arterial hardening and has also been found to stimulate digestive enzymes.

To the classical herbalist, every herb holds not only relief from a set of symptoms, but also a lesson in life that will enable the patient to return to health once that lesson has been relearned.

The types of people who usually need celery and who benefit the most from it are those who are constantly on the go—people who are both mentally and physically active all the time.

This constant stimulation of the nervous system can lead to the production of excess acid. Of course constant and prolonged activity puts a large amount of stress on the adrenal glands, which in turn makes fluid levels hard to balance.

The more activities and responsibilities such people take on, the more they tend to gain weight as retained fluid. At the emotional level, they find required rest time to be quite hard to deal with and are not able to relax and do nothing for a while.

A busy and physically active lifestyle is especially good for safely moving excess acid waste out of the body; however, if these people also tend toward worry or anxiety, then this tendency can be too much for already overly stretched adrenal glands to cope with.

The lesson for these people is in how to balance the enormous physical output they are capable of with the appropriate rest and recuperation, both mentally and physically, at the end of the day.

Growing Your Own Medicine

Wild celery (Apium graveolens) is a hardy biennial that requires a rich, deep soil that does not dry out over summer and prefers at least partial shade to prevent the leaves from becoming tough. In the wild, it is found growing in marshlands and along riverbanks.

It is well-suited to container growing, provided the pot is deep enough for its long taproot. Use a good soil-based compost and water regularly.

When placed near the kitchen, the new shoots can be picked all year round and added to salads, soups, stews, or mashed potatoes. The seeds can also be ground for use as a spice and added to soups or casseroles. In India, the ground seeds are added to bread for flavor.

To harvest the seeds, wait until late summer when they are fully ripe and just starting to fall from the seed head. Choose seeds from disease-free plants to save for propagation.