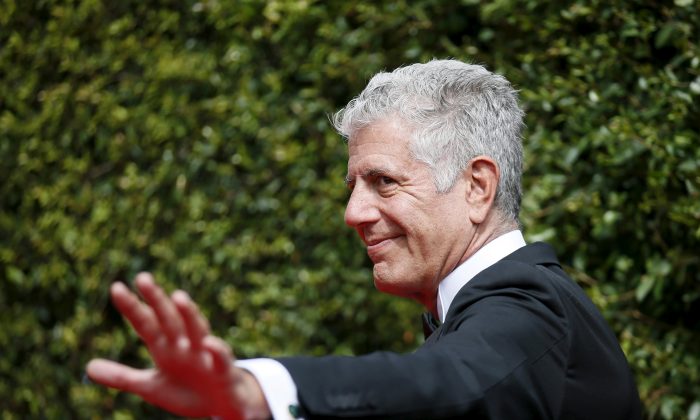 LOS ANGELES—U.S. celebrity chef Anthony Bourdain, who committed suicide in June at age 61, posthumously earned a pair of Emmy Awards on Sept. 9, for his work on the popular CNN food-and-travel show he hosted, “Parts Unknown.”

Bourdain was awarded one of the Emmys, the U.S. television industry’s highest honor, for outstanding writing of a nonfiction program for an episode of the series set in southern Italy that aired last November during its 10th season.

He also shared a second Emmy prize for best informational series or special in his role as host and executive producer of “Parts Unknown.”

Three more Emmys went to various other people for their behind-the-camera work on the series—in the categories for best picture editing, sound editing, and best short-form nonfiction or reality series.

The awards were announced on the second night of the Creative Arts Emmys, which cover mostly secondary and technical categories and are given out in advance of the higher-profile Primetime Emmys, which will be presented on Sept. 17.

Bourdain previously won Emmys four years in a row, from 2013 through 2016, as producer and host of “Parts Unknown” in the category of outstanding informational series or special.

The series, which typically featured Bourdain sampling the local cuisine and culture of far-flung or lesser-traveled destinations around the world, earned him the prestigious Peabody Award in 2014.

Bourdain also earned several Emmy nominations as host of a cooking-themed reality competition show on ABC, “The Taste,” and won a Creative Arts Emmy for outstanding cinematography in nonfiction programming for another travel-food show of his, “No Reservations.”

Bourdain, who started his career as a dishwasher in New York restaurants and rose to become one of the world’s best-known TV chefs and food connoisseurs, once sharing a televised meal in Vietnam with then-U.S. President Barack Obama, died on June 8.

He was found hanged in his hotel room in Strasbourg, France, where he had been working on an upcoming episode of his program, which was in its 11th season at the time.