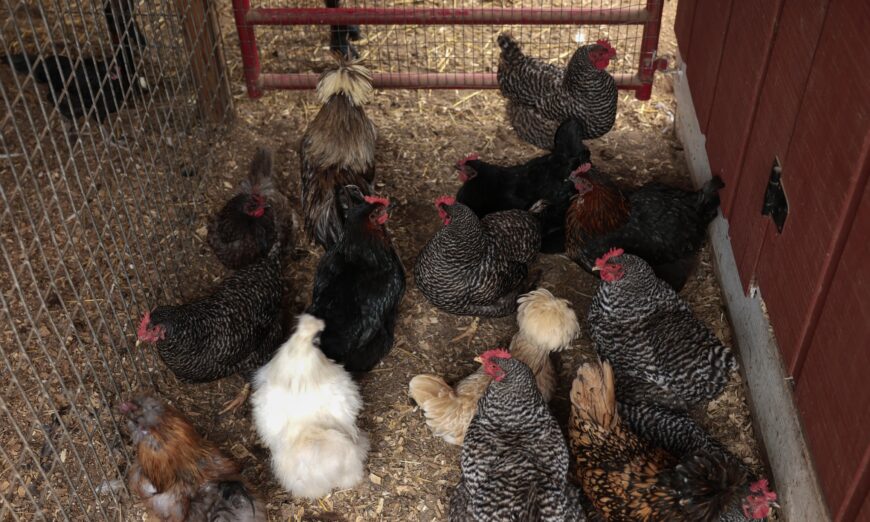 Chickens take shelter from a rainstorm at the Nu Sunrise Farms in Griffin, Ga., on March 15, 2022. (Anna Moneymaker/Getty Images)

Federal health officials are closely monitoring an outbreak of highly pathogenic bird influenza that has devastated poultry farms on the East Coast and in the Midwest in recent days.

While millions of birds have been culled due to avian influenza across the United States, officials with the Centers for Disease Control and Prevention (CDC) said this week that there are no signs this strain of bird flu poses a threat to people yet.

No cases of H5N1, the strain, have been detected among people in the U.S., said CDC spokesperson Kate Grusich.

“Based on past experience with earlier H5N1 bird flu viruses—and what is known about this group of viruses from existing epidemiologic and genetic sequence data—CDC believes the health risk to the general public is low,” Grusich told NBC News on Wednesday.

However, officials are watching to see whether the strain mutates, potentially posing a risk to people.

Data so far shows that the current H5N1 virus lacks mutations seen in past bird flu viruses that are associated with infected people, causing severe illness, the CDC said.

The Nebraska Department of Agriculture said on Tuesday that it has confirmed a case of H5N1 in a commercial flock of 570,000 broiler chickens. As a result, they were “humanely depopulated and disposed of,” according to the agency.

“[Highly pathogenic avian influenza] is a highly contagious virus that spreads easily among birds through nasal and eye secretions, as well as manure,” the Nebraska department said in a statement. “The virus can be spread in various ways from flock to flock, including by wild birds, through contact with infected poultry, by equipment, and on the clothing and shoes of caretakers.”

The U.S. Department of Agriculture, in a March 24 update, confirmed the broiler chickens were culled. There have also been sizable outbreaks in Delaware, Maryland, Iowa, Wisconsin, and other states.

In recent days, more than 2.7 million commercial layer chickens were culled due to the virus, said the USDA. Another 5.3 million were also infected in Iowa, the agency said. There have been reports of backyard-kept flocks of chickens also contracting avian influenza in recent days.

According to the World Health Organization’s data, 622 people were infected with H5N1 bird flu between 2003 and 2013, and about 60 percent of those individuals died.

Two people died from the H5N6 avian influenza in China, according to the Department of Health for Hong Kong in a statement issued in January of this year. The outbreak occurred in mainland China, not Hong Kong, the agency said.