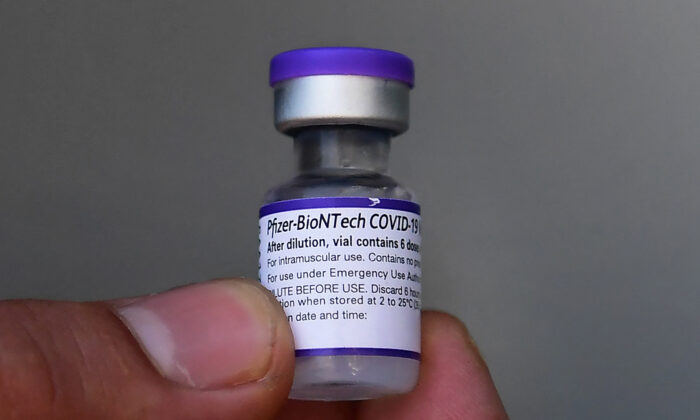 A Centers for Disease Control and Prevention (CDC) panel on Sept. 23 unanimously recommended COVID-19 vaccine boosters for several large populations, including those 65 and older, though members voted down another recommendation.

Panel members unanimously recommended a single Pfizer booster for people aged 65 and older and long-term care facility residents of any age above 18.

They also overwhelmingly voted for a booster for people between the ages of 50 and 64 who have underlying medical conditions such as cancer.

The panel was torn, though, on whether to recommend boosters for 18- to 49-year-olds “based on individual benefit and risk” who have underlying medical conditions.

Some members questioned recommending boosters for people as young as 18, based on the lack of data on side effects, which may include heart inflammation, according to CDC officials.

The panel also heard during presentations that the vaccines are holding up well against both hospitalization and death in younger age groups.

One presenter said that to prevent one hospitalization, 481 people among the 65 and older group needed a booster, whereas more than 8,700 people between 18 and 29 would need to receive one.

A fourth motion, however, was voted down 9–6.

All recommendations that passed are for at least six months after people get their primary series. The initial regimen is two doses spaced about three weeks apart.

The vote came one day after the Food and Drug Administration expanded emergency use authorization for the Pfizer jab, which was developed with the German firm BioNTech. Drug regulators said people aged 65 or older could get a booster. They also authorized people between 18 and 64 who are at high risk of severe COVID-19 or whose “whose frequent institutional or occupational exposure to SARS-CoV-2 puts them at high risk.”

Members of the Advisory Committee on Immunization Practices, which advises the CDC on vaccines, were told by CDC officials that boosters “may reduce risk of” CCP virus infection and “may reduce work absence.”

“Prevention of infection may protect health care capacity and other essential services for the COVID-19 response and maintain overall function for society,” said Dr. Kathleen Dooling, a CDC official.

Officials acknowledged that there is scant data on boosters, primarily coming from Pfizer itself and Israel, which is one of the most vaccinated countries in the world but has struggled with high numbers of cases and hospitalizations in recent months. They said, for instance, that the risk of myocarditis, or heart inflammation, and severe allergic reactions isn’t yet known.

While recommendations for older people were broadly supported, panel members were torn on recommending boosters for younger populations.

Young males, in particular, have been shown to be at “substantial” risk from myocarditis in the primary two-dose series, said Dr. Sarah Long, professor of pediatrics at Drexel University College of Medicine.

Long said the presentations given showed there were no data showing people in younger age groups with underlying conditions seeing a more rapid waning of efficacy than those who don’t have such issues.

The panel spent the most time negotiating language on its fourth recommendation. It states that people between 18 and 64 “who are in an occupational or institutional setting where the burden of COVID-19 infection and risk of transmission are high” should get a booster, based on their individual benefit and risk.

“We’re really not talking about a direct benefit to the people who are being vaccinated,” Dr. Wilbur Chen, professor of medicine at the University School of Medicine, said before the vote.

Long said it would be a “slippery slope” to have doctors interpret what the panel meant with its recommendation.

Others, though, said they backed the motion.

Health care workers have been getting so-called breakthrough infections, or infections despite being vaccinated, “at increasing rates,” Dr. Marci Drees, a representative for the Society for Healthcare Epidemiology of America who isn’t a member of the panel, told members.

“It’s very frustrating and demoralizing to them to get COVID anyway.”

Ultimately, they voted down the recommendation.

The CDC, however, bypassed the panel and endorsed all four recommendations, even the one that was rejected.