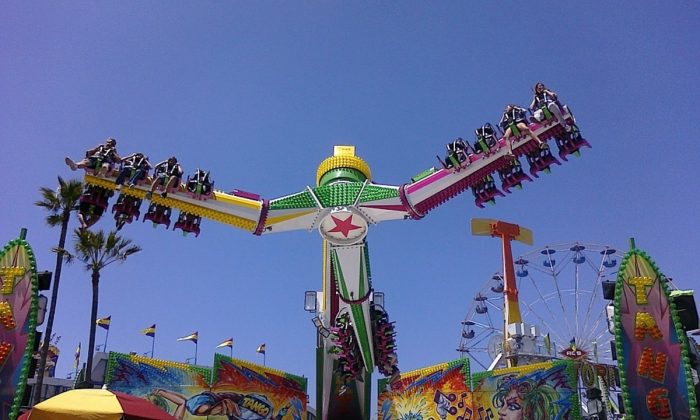 Carnival Ride Breaks in Half, Killing 2 and Injuring 27

A carnival ride in an adventure park dramatically broke into half, killing two and injuring 27 in the western Indian city of Ahmedabad on July 14.

The ride, shaped like a hammer, was carrying 30 people when the main beam holding the seats broke into half as people were mid-air, reported New Delhi Television (NDTV).

“Twenty-nine people were brought to the hospital out of whom two died while twenty-seven are being treated,” Ahmedabad Mayor Bijal Patel told Ahmedabad Mirror, a local media.

Ahmedabad: 2 people died&26 injured after a joyride at an adventure park in Kankaria area broke this afternoon. Vijay Nehra,Commissioner, Municipal Corporation says,”Police along with the FSL team is investigating the matter.Proper treatment is being given to injured.” #Gujarat pic.twitter.com/YmV1qS9w2F

According to the Press Trust of India, police identified those killed as a 24-year-old girl, Manali Rajwadi, and a 22-year-old man, Mohammad Javed.

“There are 32 seats in the ride that go round. The pipe of the main shaft broke and crashed on the ground. How that pipe broke is a matter of investigation by Forensic Science Laboratory (FSL),” Chief Fire Officer MF Dastoor told Indian wire services.

The accident happened just a few minutes after the ride left the ground at the Kankaria Adventure Park, according to Times Now News.

While police have launched an investigation, 14 people are reported to be critically injured.

Amusement parks can be a real source of adventure, thrill, and joy for people and they can also be the cause of accidents and tragedies.

In 2017, 12 carnival rides were shut down when a similar ride broke down, killing one and injuring seven at the Ohio State Fair, according to CBS Chicago.

In 2016, an 11-year-old lost her eyesight when her scalp got ripped off as her long red hair became tangled in a carnival ride at the Cinco de Mayo Festival in Omaha on May 7. Her father said she could be maimed for life, facing permanent loss of her eyesight.

In May the same year, El Paso Times reported that a 16-year-old girl lost her life when she was thrown out of a ride at the St. Thomas Aquinas Catholic Church’s Dia De Los Niños carnival.

A ride breakdown at the Delta Fair in Tennessee in September 2016 landed eight people in the hospital, according to the WMC5.

Skydive rides have also caused accidents, with two girls sustaining injuries after they were thrown out of such a ride at the Geauga County Maple Festival in 2010, reported the Vindicator.

According to a study published in Sage Journals in 2013, 92,885 children sought treatment U.S. hospital emergency departments for injuries involving amusement rides from 1990 to 2010.

“An improved national system for monitoring injuries involving amusement rides is needed. There are opportunities to improve the safety of amusement rides for children, especially to prevent injuries from falls,” the study said.

According to government data, Saferparks reported that an estimated 9,000 people in the United States landed in hospital emergency rooms from amusement park injuries in 2017, up from 6,778 in 2016.

Sherley Boursiqut contributed to this report.