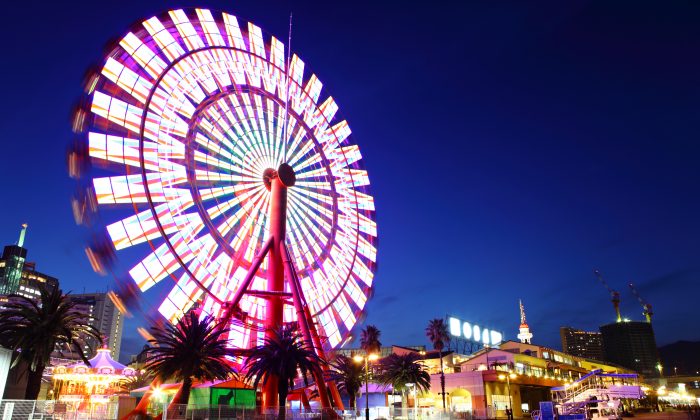 Nebraska Girl Might Lose Eyesight Due to Carnival Ride Accident

The 11-year-old girl whose scalp got ripped off when her long red hair became tangled in a carnival ride at the Cinco de Mayo Festival in Omaha on May 7, may be maimed for life—and could possibly lose her eyesight permanently, her father said.

“She was tortured,” Timothy Gilreath, the father of 11-year-old Elizabeth Gilreath, said in a press conference at Nebraska Medicine where his daughter is being treated.

He said the ride, King’s Crown, went on for five to ten minutes as it ripped and pulled his daughter around.

“They don’t even know if the muscles will work and my daughter will be able to see again. That is our baby,” the devastated father said.

“No mother should have to go threw what im going threw,” Elizabeth mother, Virginia Cooksey, said in a Facebook post on May 8.

Elizabeth’s family created a GoFundMe page asking for $50,000 in donations for their daughter’s recovery; Her family said she has already undergone three surgeries from the horrific accident.

“(At) this point we are not sure if her scalp will die or stay alive,” the page says.

“If it does die Lulu will not be able to grow her own hair.”

“I have very long hair and would like to make her a wig by cutting my haiir off could some one mesaage me a address i can send it to?” a commentator asked on the fundraising page.

“I would like to have a wig made for her. If its okay,” asked another commentator.

Thomas D. Thomas Shows, the company that runs the carnival, claimed that they are investigating the accident, according to WOWT.

“At this time, an investigation is underway. The thoughts and prayers of everyone at Thomas D. Thomas Shows are with the young girl and her family during this extremely difficult time,” the statement said.

Elizabeth, who wants to be a senator when she grows up, according to her mom, remains in critical condition.

“We have a long road ahead of us,” Cooksey wrote on Facebook.

According to an analysis of data from the National Electronic Injury Surveillance System, there are on average 4,400 children in the U.S. each year who are injured from rides at amusement parks, rides at fairs and festivals and rides found at local malls, stores, restaurants or arcades.