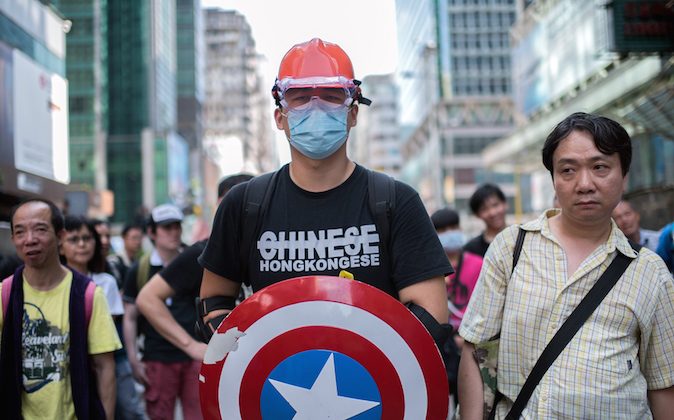 A man wearing protective gear and carrying a shield from the "Captain America" comic book series stands guard next to a pro-democracy protest barricade in the Mongkok district of Hong Kong on Oct. 19, 2014. (Alex Ogle/AFP/Getty Images)
China

After Captain America’s Arrest, the Avengers Assemble in Hong Kong

“Cap'” returned to Mong Kok, and this is how he looks like without his goggles, helmet, and shield.

Good news. Captain America is free and back in Mong Kok, sans his shield. pic.twitter.com/zdDfdpqCte

“Captain America,” the most blatant sign of “foreign interference” in Hong Kong’s pro-democracy movement, has finally been apprehended.

Chief Executive Leung Chun-ying and the Chinese Communist regime have suggested that there is “foreign interference” seeking to destabilize Hong Kong’s politics via Occupy Central.

Netizens have since joked that Umbrella Movement’s very own “Captain America” must be the “foreign interference” that Leung and Beijing are referring to.

“Captain America” has been an ever-present sight among the Umbrella Movement protesters in Mong Kok, and pictures of him amongst the protesters have frequently been posted on social media.

Alas, as of today, that “foreign interference” is a menace no more.

At about 3 o’clock Hong Kong time (3:00 a.m. EDT) on Friday, Oct. 24, there was a scuffle at the protest site in Mong Kok between anti-Occupy Central groups and the Occupy Central protesters.

The anti-Occupiers moved in to forcibly remove barricades set up by the protesters, while the protesters did their best to stop them.

According to Apply Daily, “Captain America” was one of those Occupy Central protesters keeping the anti-Occupiers from clearing them out.

During the fracas, “Cap'” allegedly knocked down one of the anti-Occupiers.

More than ten Hong Kong policemen at the scene immediately closed in on “Captain America,” and arrested him for assault, much to the displeasure of the crowd.

After “Captain America’s” arrest, Hong Kong photographer Kevin Cheng posted a tribute to “Cap'” on Facebook, thanking him on behalf of the protesters at the Mong Kok protest site for defending them from the “brutal police batons” with his shield “day in, day out.”

However, Leung and Beijing’s “foreign interference” headaches might not be over just yet with the arrest of “Cap’.”

Later that night, “Spider-Man” and “Iron-Man” showed up in Mong Kok, much to the delight of the crowd.

Next up: Avengers Assemble?