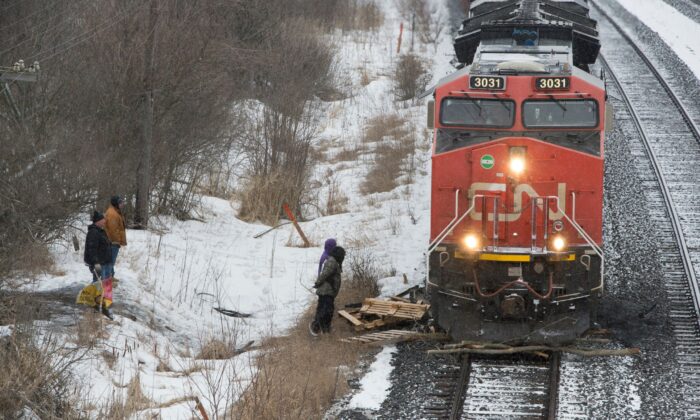 A Canadian National Railway (CN Rail) train moves through wooden pallets placed there by occupants of a Tyendinaga Mohawk Territory encampment set up in support of the Wet'suwet'en Nation who are trying to stop construction of British Columbia's Coastal GasLink pipeline, in Tyendinaga, Ontario, Canada on Feb. 26, 2020. (Alex Filipe/Reuters)
Companies

Canadian National Railway Co. said on Friday it would resume a previously approved share buyback, days after walking away from its $29.6-billion deal for U.S. railroad operator Kansas City Southern.

The largest Canadian railroad expects to complete the remaining C$1.1 billion ($869.02 million) of share repurchases by the end of January next year, it said in a statement.

The company, under fire from some investors for its failed bid to buy Kansas City Southern, said it was targeting C$700 million of operating income improvements in 2022 by increasing labor productivity and reviewing its non-rail businesses.

It reaffirmed its 2021 targets of a double-digit increase in adjusted earnings per share and free cash flow.